In the course of this year’s ‘Thunderstorm’ joint police operation, the Hong Kong and Macau police jointly resolved a case of money laundering by a cross-border criminal organization said to have involved transactions of suspicious funds worth HK$1.1 billion (US$140.1 million), with 22 suspects arrested so far, police authorities stated.

Thunderstorm 2022, a joint operation involving police forces of Guangdong, Hong Kong and Macau has been ongoing since May 20 of this year.

Almost 6,389 police officers were mobilised by police authorities under the coordination of the Unitary Police Services (SPU) and carried out by the Customs, the Public Security Police Corps (CPSP) and the Judiciary Police (PJ).

Until June 17, some 621 inspections were carried out in 1,328 locations, namely casinos, pensions, massage establishments, hotels, shops and commercial establishments and suspects’ apartments.

Among the detained 83 were involved in illegal currency exchange activities, 20 in prostitution and 237 in other suspected crimes, including theft, fraud, rape, money laundering, usury and related to narcotics, and were referred to PJ for questioning.

The joint operation is still ongoing despite the current pandemic outbreak.

June 25, 2022
The latest developments in the war in Ukraine.

Japan inflation stays at seven-year high in May 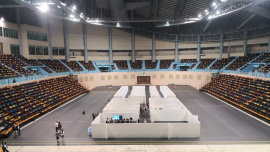