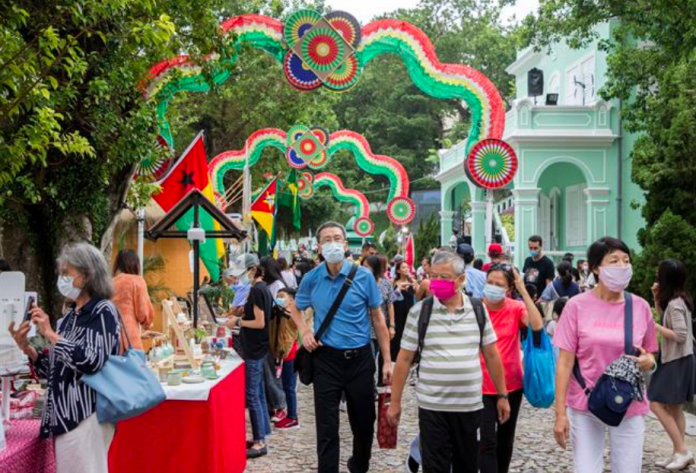 The 3rd Encounter in Macao – Arts and Cultural Festival between China and Portuguese-speaking Countries will run from 11 November to 12 December, and include a film festival, cultural talks, and the local favorite Lusofonia Festival.

The month-long festival will include the Lusophone Studies and Film Festival, the annual Arts Exhibition between China and the Portuguese-language countries, as well as traditional music and dance shows in the community, the Activities for the 100th anniversary of the Taipa Houses and the series of cultural talks on “One Belt, One Road” – Samba and Dance.

The film festival will showcase 30 Chinese and Lusophone films under the theme “The Gourmets of Cinema”, while the annual arts exhibition comprising two exhibitions “Symbiosis” and “Embrace in Diversity” presents contemporary works by artists from Macau, the Greater Bay Area and Portuguese-language countries.

Six Lusophone groups from Macau and the dance and singing group from Fujian province will present music and dance performances, while guided tours will form part of the activities for the 100th anniversary of the Taipa Houses, five residences built-in 1921 for the territory’s civil servants and transformed into a museum site in 1999.

African feminist literature and Brazilian literature in the world will be in focus in two colloquiums, in the Cultural Lectures Series.

Portuguese language music, handicrafts and cuisine will once again be in the spotlight, from December 10 to 12 at the 24th Lusofonia Festival.

The first edition of the Lusofonia Festival was held in June 1998, with the main objective of honoring the Portuguese-speaking communities in Macao\u for their contribution to the city’s development.

Over the three days of the Festival, different booths of the Macao Portuguese-speaking communities from ten countries and regions, will be set up, introducing their countries or regions’ traditional music, arts and crafts, traditional costumes, gastronomy and tourist information.

In the three days of the Festival, around 30 local Portuguese-speaking artistic groups and one group from Mainland China will perform different styles of music and dance on the main stage in the Amphitheater of Taipa Houses and soft music on the stage installed in Largo do Carmo.

In addition, during the three-day dinner of the Festival, at Largo do Carmo, specialties from the various participating countries or regions will be served. During the event, next to the entrance to Taipa Houses, there will also be a temporary kiosk that will serve typical Portuguese snacks and drinks.

In previous years, the Lusofonia Festival was held autonomously in October, a format and date that could be reinstated if the pandemic conditions improve next year.

The full Encounter in Macao – Arts and Cultural Festival between China and Portuguese-speaking Countries budget will amount to MOP8.9 million.