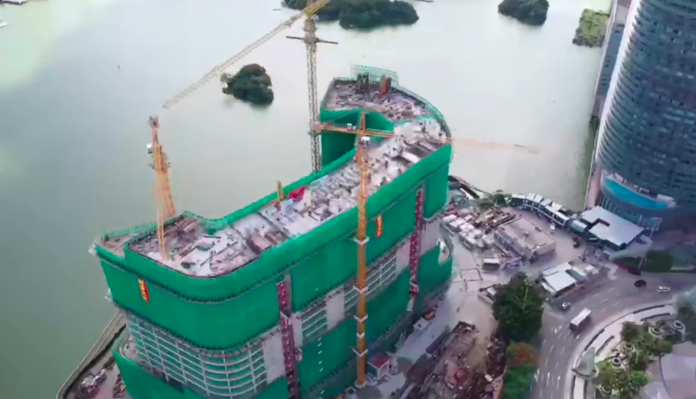 The previously Genting-connected 5-star integrated resort project in Nam Vam Lake has completion set date for June, 2022, but has also suffered several construction suspensions due to the pandemic and in order to secure funding, the group informed in a recent financial filing.

Leisure and hospitality company Genting Hong Kong Limited has announced today (Thursday) that it has already sold its interests in the 8,100 square meters land plot near Praca Ferreira Amaral land where the formerly named Resorts World Macau, Lago 1 project is being developed to a company owned by local real estate businesswoman, Ao Mio Leong, for HK$750 million (US$96.7 million).

Ao is described as a located investor, whose activities are concentrated in real estate, leisure, and hospitality investments. She is also connected to real estate development company Yoho Group, which has been involved in the development of the Macau Roosevelt Hotel at the Macau Jockey Club land plot; the Yoho Twins and the Co-Tai Marina Bay project.

Genting Hong Kong is under Malaysian hospitality and gaming conglomerate, Genting Group, with the company noting that the project would divert its resources at a time when the group needs to focus on its cruise and shipyard operations.

‘The Transaction is aligned with the Group’s objective to sell non-core assets and will reduce the Group’s financial burden in meeting future funding requirements in relation to Genting Macau’s business. Further, the transaction will increase the liquidity of the Group […] thereby enabling layup of the cruise ships in its fleet which are not in operation as well as the ongoing operation of those cruise ships that continue to sail,’ Genting noted.

The Gross Development Value (GDV) of the project is estimated at HK$4.6 billion, with some HK$1 billion spent in the construction so far and some HK$2.7 billion more in expenses expected until its completion.

Previous public development plans for the property including the construction of a 21-storey building for a five-star hotel with 708 hotel rooms and a gross floor area of 70,284 square meters, plus a parking lot of 12,080 square meters and a free area with an area of 5,581 square meters.

Genting’s possible disposal deal was first announced on November 10 and completed on December 2, 2020, the group announced in a financial listing today (Thursday).

Under the agreement, Genting’s ferry business subsidiary, Star Cruises Asia Holding Ltd., agreed to sell 50 per cent of the total issued share capital of Genting Macau Holdings Limited and the entire amount of the shareholder’s loan, rights, title, benefits and interests to White Supreme, an investment holding company registered in the Marshall Islands and held by Ao.

Genting Macau, in turn, holds 75 per cent of Macau Land Investment Corporation, the parent company of Treasure Island Entertainment Complex Limited, the company incorporated in Macau and the registered and beneficial owner of the 8,100 square meters land plot.

Following the deal, Genting Macau will stop to be a subsidiary of the Genting group.

The remaining 25 per cent interest in Macau Land Investment is held by two companies in part held by local businessman Kwan Yan Chi and his brother Kwan Yan Ming.

The land-use rights of the property were granted for a term of 25 years commencing from June 25, 2008 with an annual government rent of some MOP243,000.

In July, 2017 the Land, Public Works and Transport Bureau (DSSOPT) granted Treasure Island an extension of the construction license for 36 months.

Due to the COVID-19 pandemic, development of the land was suspended for 15 days in February 2020, but construction – under China Civil Engineering Construction Company (Macau) – gradually resumed thereafter up to July 2020 when the building structure was topped off, after which construction was suspended in order to conserve the available cash until further funding is secured.

The project construction was then suspended due to the pandemic with the DSSOPT issuing two letters from in September and October of last year in which it informed that it noticed the current suspension of construction works and urging Treasure Island to comply the completion period, which is set to expire on April 18, 2021.

‘Subject to obtaining relevant approval from the Macau Government, the latest target completion date was expected to be around mid-2022,’ Genting noted.

Genting expressed in its most recent annual report that it planned to develop a hotel and casino in the site, with the group noting in the recent filing that there are no plans to change the use of the property.

An independent valuer, Ascent Partners, was hired by Genting to evaluate the property, but it was unable to conduct a physical inspection due to the Covid-19 pandemic.

Still, for reference purposes it assessed its market value at HK$1.5 billion.