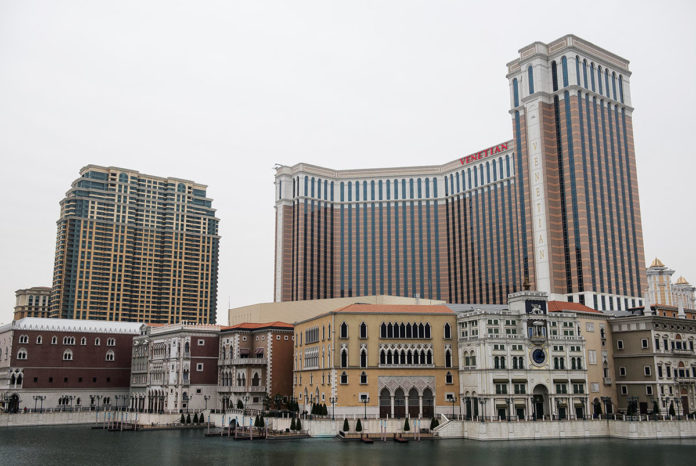 Luís Cavaleiro de Ferreira, a legal representative for LVS and its three affiliates, made this revelation today in the Court of First Instance as one of the examples showing that the official ties between LVS and AAEC had already concluded before LVS partnered with Galaxy later to successfully win a local gaming concession two decades ago.

The lawyer delivered a final statement today on behalf of LVS in the lawsuit, in which AAEC accused the affiliates of the U.S. company for breaking up their partnership 20 years ago.

Lawyer Jorge Menezes already gave a closing remark for his client — AAEC that is led by Taiwan businessman Marshall Hao — last week, in which the company asked for compensations of at least US$7.5 billion plus extra from LVS for “maliciously” breaching their agreement.

Following the conclusion of the closing statements delivered by both sides, Seng Yoi Man, the presiding judge of the trial, said today another session will be scheduled on February 15 to determine whether some of the facts in the case could be established before a verdict is made.

A considerable amount of time of the trial in the past few months, which has started since June, has focused on when LVS and AAEC split up, particularly when their letter of intent of cooperation inked in 2001 expired.

Mr. Menezes insisted in both last week and today that their collaboration only wrapped up on 6 February 2001 when LVS notified AAEC that their partnership would be terminated. This means the LVS affiliates breached the pact about exclusive negotiations with AAEC by reaching out to Galaxy in late January of the same year for a gaming license.

However, Mr. Ferreira told another story in his closing statement today, stressing the LVS-AAEC partnership expired on 15 January 2001 as stated in the letter of intent.

According to the legal representative, LVS had invited AAEC to sign a document about the declaration of their relationships for the bid before the expiry of the letter of intent on 15 January, as well as proposed for LVS to become a shareholder of AAEC to make their partnership and bid more competitive in the eyes of the local authorities.

But these suggestions had all been declined by Mr. Hao and his team at the time, Mr. Ferreira claimed.

In addition, AAEC had actually initiated talks with two other companies — including the affiliate of Galaxy — respectively in late January of 2001 for the possibilities of partnership for bidding a gaming license together, Mr. Ferreira alleged, adding LVS had not been notified about or attended these meetings at the time.

No consensus could be reached between AAEC and Galaxy about the collaboration because each wanted 60 per cent of the share of the joint venture, the LVS lawyer told the court today.

Concerning why AAEC had to make the above moves two decades earlier, Mr. Ferreira stated: “We don’t know. Perhaps only Marshall Hao knows.”

The legal representative of LVS also emphasised there was “no evidence” proving LVS initiated the talks with GEG for collaboration before the former’s partnership with AAEC ended on 15 January 2001.

In regards to the matters, Mr. Menezes responded today in the court that LVS’s version of the story could not be trusted.

In the closing statement last week by Mr. Menezes, AAEC argued the bids prepared respectively by LVS-AAEC and LVS-Galaxy were similar. The venture between LVS and Galaxy won a license at last “not because of their bid but our bid”, the AAEC lawyer stated.

Mr. Ferreira addressed today that the LVS-AAEC bid was drafted and prepared by the affiliates of LVS — but not AAEC — in accordance with the integrated resort model of LVS, which had been implemented for years in the world’s largest economy.

While some of the 16 witnesses testified in person or in writing in this lawsuit in the past few months have pinpointed that any party partnering with LVS was “very likely” to win a gaming license two decades earlier, the LVS lawyer underscored in his closing remark that AAEC “has not provided any evidence” so far the venture between both parties would still win a license if they had continued to work together.

The bid handed by AAEC to the government at last without LVS received the lowest score among the 18 eligible bidders two decades ago, Mr. Ferreira said.

Even if the AAEC bid had included LVS, the scores would just be enough to place AAEC in the 7th place among the bidders, the lawyer said, citing the calculation of the scores given by the authorities to each bidder at the time. The Macau government only granted three gaming concessions to the top three bidders in early 2002, including the LVS-Galaxy bid.

In the previous sessions of the lawsuit earlier this month, Mr. Ferreira alleged a signature of William Weidner — former president and chief operating officer of LVS until 2009 — was forged in the memorandum of cooperation between LVS and AAEC, which was presented to the court by AAEC as part of the written evidence that comprises over 10,000 pages of documents.

Citing a written reply from Mr. Weidner on the top, Mr. Ferreira stated today the former LVS official declined “he has signed or authorised anyone to sign” the document.

The lawyer even went further to day that this “forged” document was “maliciously” included in the written evidence of the case — an “unprecedented” situation in his career of 30-plus years.

He also complained AAEC has included dozens of documents as written evidence of the case after all witnesses have been testified, giving no opportunities for the witnesses to talk about the documents.

Concerning the claim of forgery, Mr. Menezes said last week he would not be “that stupid and dishonest” to carry out such a deed, and the claim was “an insult” to the plaintiff and his team.

The AAEC legal representative also noted today Mr. Weidner only “has told part of the truth”.

In the hearing of more than seven hours today, the legal representatives of both sides took time respectively to accuse the witnesses linked to the opposition camp — namely, former employees of LVS or alleged shareholders of AAEC — had no credibility.

The LVS vs AAEC lawsuit was launched in the U.S. in 2007 but it was later dismissed due to the statute of limitations and procedural reasons, before lodging in Macau in 2012. AAEC was represented by Mr. Menezes in the Macau case, while LVS and its three affiliates — namely, LVS (Nevada) International Holding Inc; Las Vegas Sands LLC; and Venetian Casino Resort, LLC — were represented by Mr. Ferreira.

June 28, 2022
The European Central Bank will go "as far as necessary" to fight inflation that is...
Load more