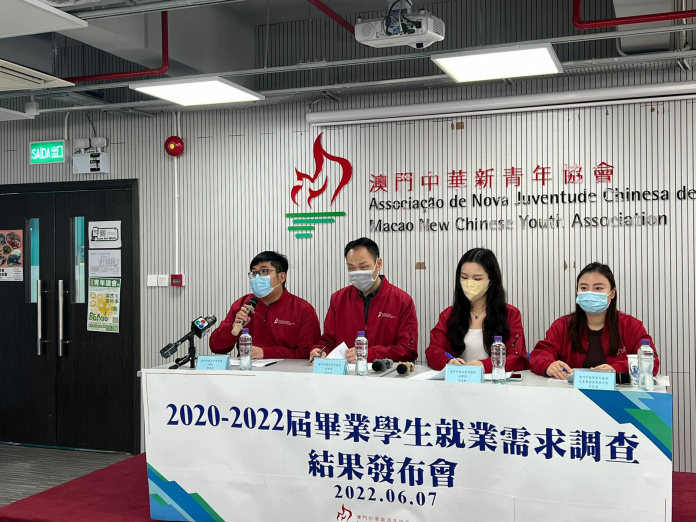 Over 97 per cent of local graduates are pessimistic about their job prospects in the current employment market, a survey conducted by the Macau New Chinese Youth Association shows.

The COVID-19 pandemic outbreak since 2020 has severely hit the local economy and the job market is continuing to deteriorate, the director of the association, Leong Chon Kit said in a press conference of the survey today (Tuesday).

The latest report from the Statistics and Census Bureau (DSEC) indicated that the unemployment rate for local residents was 4.5 per cent for the period from February to April 2022, making it one of the highest rates since 2009.

Meanwhile, the labour force looking for their first job accounted for 6.2 per cent of the total unemployed, showing a 0.3 percentage point increase.

According to the study results disclosed today, more than 55.3 per cent of the respondents considered that at least six months were required after graduation to find a ‘satisfactory’ job in Macau.

Fresh graduates are at a disadvantageous position in the labour market, and 95 per cent of the respondents expressed that the current economic downturn has increased the difficulty for graduates to find jobs in Macau, the result of the 2020-2022 graduates employment demand survey initiated by the association revealed.

The survey conducted among students who have graduated in the past three years shows that the short supply of job openings, lack of suitable job positions in the market, the overall economic downturn, and unsatisfactory wages, are the biggest difficulties for the graduates in the job-seeking process.

The association director told MNA that the average expected monthly salary of graduates is around MOP16,000 (US$1980), but it varies depending on the years of graduation and the level of qualification diploma they hold.

“People who graduated earlier with some working experiences generally have lower salary expectations because they have recognized the real workplace situation, while people who receive higher education such as master’s degree graduates, have higher salary expectations with hopes to get some MOP 20,000 per month,” Leong stressed.

Also, Leong indicated that only one-third of the survey respondents have found a full-time position, while others are doing a part-time job or are still unemployed.

Meanwhile, only around 30 per cent of respondents had participated in employment assistance services provided by the government, schools or local associations, while the most effective supporting measure considered by the youngsters is that the government can pay part of salaries on behalf of the companies.

Regarding the willingness of searching for job opportunities in the greater bay area, the survey shows that 51 per cent of the graduates are willing to work in mainland cities in the GBA, while salary and living cost are the most important factors for their consideration.

In addition, the association vice-chairman, Lao Cho Chon, has suggested in the press conference that the SAR government should establish a special online platform for youth employment services.

Lao stated that the platform can provide career guidance services to the youngsters, including displaying the employment information from the government, inviting industry insiders and human resources consultants to give free live streaming courses, and providing one-to-one online consultation sessions for young people.