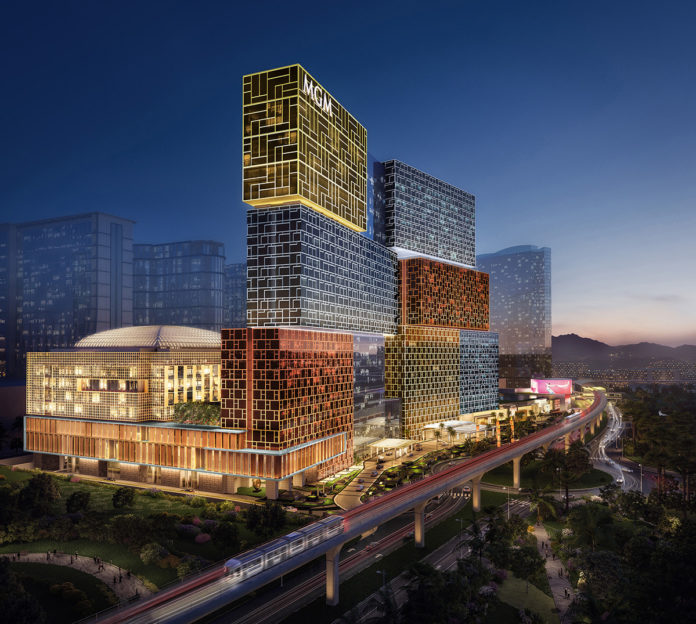 After casino-operator MGM China officially announced postponing its launch date for MGM Cotai to the second half of the year, analysts now believe the new casino-resort will open its doors no later than October 1.
“Based on our on-the-ground checks…we believe the project can still open in August or September (ahead of October Golden Week),” wrote JP Morgan analysts in their latest research note.
Meanwhile, Telsey Group estimates the casino operator will pick October 1 as the project’s opening date.
On Tuesday, MGM China said in a filing to the Hong Kong Stock Exchange that delaying the opening date from the second quarter this year is due to the complexity of the design of the project, as well as to its commitment ‘to a successful opening that reflects the demands of the current market’.
Nevertheless, analysts from Telsey Group, led by David Katz, believe the postponement was just a rally of the company, noting: ‘The delay in opening the MGM Cotai property is likely a strategic positive, in that a later opening should meet a stronger market and more competitive landscape.’
JP Morgan analysts led by D.S. Kim also perceive ‘the delay is unlikely to impact the company’s fundamentals, the news to us is largely a non-event’.
The analysts added they still hold a positive outlook for the gaming operator.
‘Admittedly, MGM may lack positive stock-specific catalyst in the near term, considering the project delay,” wrote Mr. Kim. ‘However, we are OW on MGM for the medium to long term, as we believe the stock offers a compelling combination of best-in-class execution, substantial multi-year profit growth, and attractive medium-term value.’
Telsey group echoed a similar view, saying: ‘the announcement does not alter our positive thesis given the overall positive earnings momentum and relatively attractive valuation.’
Over the past weekend, the company’s CEO, Grant Bowie, told reporters that the company was targeting to unveil the casino-resort during the third quarter of the year, adding it had not made any decision on the number of gaming tables that it is to apply for from the regulator for the project.
The casino project was initially slated for a 2016 opening date, then later pushed back to the first quarter of this year, before it was further postponed to the second quarter, and now the second half.
On the other hand, JP Morgan analysts added in their note that they are still bullish on the city’s gaming sector.
‘We believe the industry has entered a genuine upturn in demand, profit, and cash flow, which in turn should drive sustainable earnings upgrades and allow investors to enjoy predictable returns,’ they wrote.