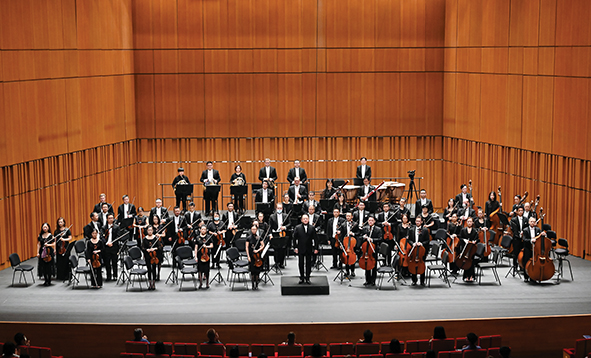 The Macao Orchestra (OM, from its Portuguese acronym), under the auspices of the Cultural Affairs Bureau, will present the romantic “Valentine’s Day Concert – Love in Spring” on 26 February, at 8pm, at the Macao Cultural Centre Grand Auditorium.

The concert will be conducted by Jing Huan, Principal Conductor of the Guangzhou Symphony Orchestra, who will join hands with the Macao Orchestra and young violinist Mengla Huang, winner of the Premio Paganini International Violin Competition in 2002, to present Korngold’s famous work, the Violin Concerto in D Major, Op. 35. The masterpiece comprises three movements, each revolving around the soundtracks of different films, namely Another Dawn, Anthony Adverse and The Prince and the Pauper.

The romantic evening will also feature Schumann’s Symphony No. 1 in B-flat Major, Op. 38, “Spring”, the first symphony written by the romantic composer after his marriage to his wife, Clara. The work is described as the spring in Schumann’s life as it is filled with the purity and happiness of a romantic relationship.

Tickets will be available through the Macau Ticketing Website at www.macauticket.com or at its outlets. Ticketing hotline: 2855 5555.

US trade nominee says Biden team backs use of tariffs

Syria health workers to get Covid jabs from next week

Non-resident workers do not enjoy the same absolute rights as residents – Secretary for...

February 25, 2021
Non-resident workers do not enjoy the same right to protest as residents, Secretary for Security...

February 25, 2021
For the first time, the Monetary Authority of Macao (AMCM) has decided to start to...

February 25, 2021
The Macau International Airport (MIA) management suffered a significant decline in revenues in 2020 but...