The African Union (AU) Commission on Saturday welcomed the entry into force of Treaty on The Prohibition of Nuclear Weapons.

The statement was made by the Chairperson of the AU Commission, Moussa Faki Mahamat, as he welcomed the entry into force of the Treaty on the Prohibition of Nuclear Weapons (TPNW) on Friday.

The Chairperson of the 55-member pan-African bloc “noted that this global historic landmark, reaffirms the AU’s commitment towards the achievement of a world free of nuclear weapons,” an AU statement issued on Saturday read.

Mahamat further stressed that the treaty is a welcome contribution towards realizing global peace and security through nuclear disarmament.

The Chairperson of the AU Commission also noted “the strong input of African Union member states in the process leading to the negotiation and adoption of this Treaty, which is in line with the African Nuclear-Weapons-Free Zone Treaty (the Treaty of Pelindaba).”

Treaty of Pelindaba, which entered into force in July 2009, is a resolve of AU member states to keep the African continent free of nuclear weapons.

Mahamat also congratulated the AU member states that have ratified the treaty and called upon those that have not yet done so to accede to the treaty.

He affirmed the commitment of the AU Commission to support its member states to meet their obligations towards realizing the aspiration of a peaceful and secure Africa, as contained in the continent’s Agenda 2063.

The Treaty on the Prohibition of Nuclear Weapons includes a comprehensive set of prohibitions on participating in any nuclear weapon activities, which include undertakings not to develop, test, produce, acquire, possess, stockpile, use or threaten to use nuclear weapons.

The Treaty also prohibits the deployment of nuclear weapons on national territory and the provision of assistance to any state in the conduct of prohibited activities. 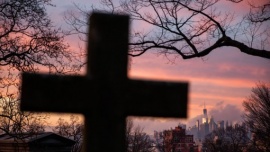 February 26, 2021
Dana Gavrinevova, a sports teacher at a Prague secondary school, has watched in horror as...