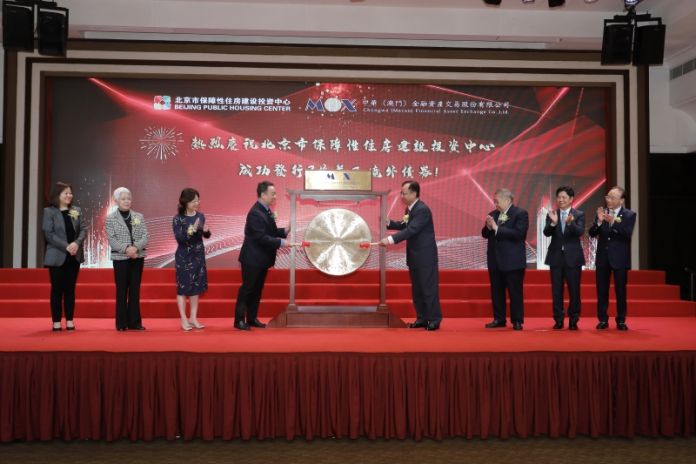 The listing was the first USD overseas bond issued by the Beijing group, with BPHC’s General Manager, Jin Yan, describing it as significant support for the construction and development of Macau’s bond market during the listing ceremony held yesterday (Friday).

Meanwhile, the Chairman and President of the MOX Executive Committee, Zhang Weichun, stated in his speech that MOX aims to promote the moderately diversified development of Macau’s economy and enhance its influence in the international financial market while promoting financial cooperation between the mainland and Macau in the international capitals market.

Founded in 2018 by Chinese state-owned conglomerate Nam Kwong Group in Macau, the MOX is the first financial institution in the territory to provide services of bond issuance, listing, registration, custody, trading and settlement.

Over the past two years, MOX has issued 37 debt products as of late 2020 in a total value of over MOP100 billion, mostly hailing from Mainland China.

During the presentation of the 2021 Policy Address, Secretary for Economy and Finance said that the local financial sector has “objective conditions that contribute to the horizontal diversification” of the economy, with the main focus centred on establishing a bond, wealth management and leasing market “as quickly as possible”.

In comments to Macau Business, the Monetary Authority of Macau (AMCM) considered that the main priority for authorities concerning the development of the local financial market would be in establishing the conditions for securities business and issuing bonds.

Over the past two years, the AMCM has issued guidelines that set the rules for the eligibility of bond issuers and for the disclosure of information, as well as the duties and responsibilities of the underwriting and custodian entities, mainly the Guideline on Management of Corporate Bond Issuance and Trading, which imposes transparency and governance requirements on bond issuers.

May 14, 2021
When Daniela Vicino started work as a teacher in Sicily three decades ago, she had...