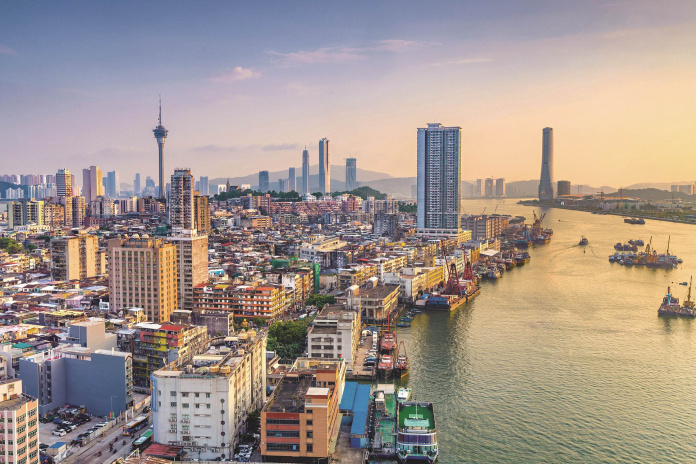 Macau’s economy is set to see a double-digit growth this year according to some forecasts. However the interest rate hike cycle, headwinds for Mainland China’s economy and other factors could unsettle the slow recovery pace besides the development of the Covid-19 situation

Although there is still a long way for the city to resume back to the pre-Covid-19 level, observers believe the local economy will continue to stay on track this year but external uncertainties aside from the pandemic might impose challenges in this recovery path.

Latest data from the Statistics and Census Service (DSEC) show the gross domestic product (GDP) of Macau expanded 27.5 per cent year-on-year in real terms in the first three quarters of 2021 following two consecutive quarterly increases. The final result for the entire year — which is still not available as this magazine went to press — was expected to maintain a double-digit hike after plunging 54 per cent year-on-year in 2020 over the coronavirus outbreak.

A growth of 17 per cent in 2021 is the estimate of the International Monetary Fund (IMF) stated in its latest report after concluding its regular inspection on the Macau economy in January. ‘The establishment of a travel corridor lifted quarantine requirements for qualified visitors between Macau SAR and the Mainland [China] and breathed life into the gaming sector. However, recurring outbreaks weighed on gaming services in the second half of the year,’ the report states.

‘Macau SAR’s recovery is expected to continue going forward. GDP is projected to grow by 15 per cent in 2022 driven by the gradual return of foreign tourists and the recovery of domestic demand,’ IMF expects.

Edmund Loi Hoi Ngan, an associate professor of the Social, Economic and Public Policy Research Centre of Macau Polytechnic Institute (MPI), also expects the territory could at least achieve a single-digit growth in 2022 albeit uncertainties clouding the economy, such as the development of the pandemic. “When Hong Kong visitors could come to Macau will be crucial to the performance of the gaming revenue and the local economy,” the academic says. “If this could be achieved, the gaming revenue will at least be able to reach the level of MOP100 billion [US$12.5 billion] or more this year.”

Since the start of the Covid-19 pandemic in early 2020, the city has so far only remained largely quarantine-free travel arrangements with the mainland, Macau’s largest feeder market that accounted for over 60 per cent of the total number of travellers in the pre-pandemic times. There have been talks about the gradual resumption of normal traffic between Macau and Hong Kong — the city’s second largest feeder market that represents about 20 per cent of travellers — for months, but no fruitful outcomes have been materialised yet.

With the partial return of visitors, the gaming revenue — the main pillar of the local economy — generated MOP86.86 billion last year, up by 43.7 per cent from 2020 but still accounting for only 30 per cent of the pre-pandemic volume. The official forecast for the annual gaming revenue in 2022 is MOP130 billion: the authorities believe it is possible to do so should the Covid-19 pandemic situation be under control nationwide and worldwide.

Besides the pandemic situation, in the perspective of Mr Loi, there are other external macroeconomic factors that might affect the local economy. “The growth of the mainland economy is facing pressure… while we might enter a cycle of interest rate hike. These all could translate to challenges for the local economy,” he says. “So I expect a slow recovery path for Macau.”

He refers to the fact that the United States might start to increase interest rates in the coming months. Given the indirect peg of the local currency — pataca — with the United States dollar via the Hong Kong dollar, local lenders usually follow the moves of their counterparts in the world’s largest economy.

The U.S. Federal Reserve announced in late January that it is likely to hike interest rates in March with subsequent increases, but the details of the pace of hikes are not available at the moment. This initiative by the central bank is to tame down the soaring inflation in the U.S that is now hovering at the highest level in nearly four decades. ‘Supply and demand imbalances related to the pandemic and the reopening of the economy have continued to contribute to elevated levels of inflation,’ the Fed noted.

The “very high and rapid” inflation rate in the U.S., followed by “a very big jump in interest rate from the Fed and other central banks”, could trouble the Macau economy, Jacky So Yuk Chow, chair professor and vice president dean at the School of Business of Macau University of Science and Technology (MUST), also underscores, as this will mean higher borrowing costs for individuals and enterprises.

How this factor plays out depends on whether the inflation in the U.S. is short-lived or might linger. “I believe that the inflation will be short-lived if it is because of the logistic and supply chain issues caused by the traffic jams around the world [due to the pandemic],” Professor So says. “If the inflation problem proves to be structural and long-lived, this will definitely create uncertainties for the Macau economy and beyond.”

The scholar also underlines the importance of the mainland economy for the city. “[Mainland] China’s situation is uncertain — its growth rate may be slower [this year] because of some government actions against the real estate developers in terms of ‘deleveraging’ through the ‘three red lines’ policy, and the anti-trust regulations against the giants of the hi tech industry,” he illustrates, referring to the so-called three-red-lines guidance imposed by Beijing on selected developers since mid-2020 to improve the financial health of the real estate sector, including the liability-to-asset ratio of not be less than 70 per cent for developers.

Though the mainland reported an expansion of 8.1 per cent in GDP in 2021, accelerating from a jump of 2.2 per cent in 2020, analysts have anticipated the economy would only grow between 4 and 5 per cent this year. “China’s economy is under multiple headwinds for now and a policy easing cycle is underway,” investment bank Macquarie remarked in a recent note to investors.

Nonetheless, Professor So remains cautiously optimistic towards the future economic prospect of the territory. “The virus, on the other hand, may become ‘normal’ near the end of this year like the third or fourth quarter,” he says. “If so, tourists from [Mainland] China, Hong Kong and Asia may come back, that should help Macau regain ‘normal’  growth. Please note that the ‘super-growth’ in the past will not return for sure.”

The Macau Economic Association has forecasted the local economy could increase between 5 per cent and 16 per cent this year provided the annual gaming revenue at the level of MOP95-140 billion. The Centre for Macau Studies and Department of Economics of the University of Macau (UM) has also recently released the report on the 2022 macroeconomic forecast for Macau, which states that the economy could grow between 3.6 per cent and 37.9 per cent in 2022, mainly depending on the number of visitors to the city. Should the visitation tally rounds off at 9.9 million visitor arrivals this year, the GDP would rise 3.6 per cent; there would be a hike of 15.3 per cent in GDP for 13.8 million visitor arrivals and a surge of 37.9 per cent for 21.7 million travellers, the report states.

Macau received 7.71 million travellers in 2021, up by 30.7 per cent from 2020 but still only translating to just 20 per cent of the pre-pandemic volume. The authorities have recently remarked that the target for the visitation tally in 2022 would be at least 10 million.

“The prospects for this year will be similar to last year… and it’s certain that the overall economic performance will not recover to the golden times in the past [in the near future],” says Patrick Ho Wai Hong, an associate professor in the Department of Economics of UM. “It might take at least two to three years for the visitor arrivals just to be back to 60-70 per cent of the pre-pandemic volume in the most optimistic forecast.”

A more positive tone is expressed by the IMF, which believes the Macau GDP could surpass the pre-crisis level in 2025, boosted by increasing investment linked to the issuance of new gaming concessions and further integration with the Guangdong-Hong Kong-Macau Greater Bay Area.

The territory’s six gaming licenses are going to expire by June this year, and the authorities finally published the proposed bill of amendments to the existing gaming law in January that will pave the way for the new round of public tender. Professor Ho remarks the long-awaited release of the draft bill helps reduce the uncertainties for the gaming sector, which is a plus for the local economy.

The UM report also pinpoints that local enterprises are faced with a lack of demand and unable to generate a steady income source without a steady source of visitors, adding the unemployment rate for 2022 will hover between 2.6 per cent and 3 per cent and the rate for residents only will be higher at 3.5-3.9 per cent.

“The community expects there will be more support in this climate and I think the government could prepare for a new round of measures… to particularly bolster the small-and medium-sized enterprises,” Professor Ho says. “The government should also focus on increasing capital investments and public works to keep the economy going and help lower the unemployment rate.”

In the past two years the authorities have dug deep in the fiscal reserve to roll out various programmes to spike local consumption and support local business, including consumption vouchers, one-off financial subsidies and others. The latest round of financial incentives and support could date back to last October, including a one-off subsidy between MOP10,000 and MOP200,000 for business owners and freelancers that recorded no profits in 2020.

Acknowledging the efforts undertaken by the SAR government in the past two years, the IMF also reiterates the significance of the support for the community amid uncertainties lying ahead. ‘Fiscal policy should be recalibrated to promote growth. Targeting cash transfers to the most vulnerable households, which have a high propensity to consume, can be more effective in supporting the recovery and inclusion. Incentivizing job creation will support the recovery and facilitate resource reallocation,’ the January report says.

Lei Cheok Kuan, chairperson of the Industry and Commerce Federation of Central and Southern District of Macau, shares a similar perspective. “The fluctuations of the pandemic have severely dampened the morale of local SMEs and their confidence towards the future,” the businessman says. “The business environment seemed to turn a corner in December following disruptions in the summer and October but the new cases [in nearby Guangdong] in January have caught us off guard again.”

“The authorities should do more to boost the morale of local businesses,” he continues. “We believe the economy will get better one day but we don’t know when this day will come.”