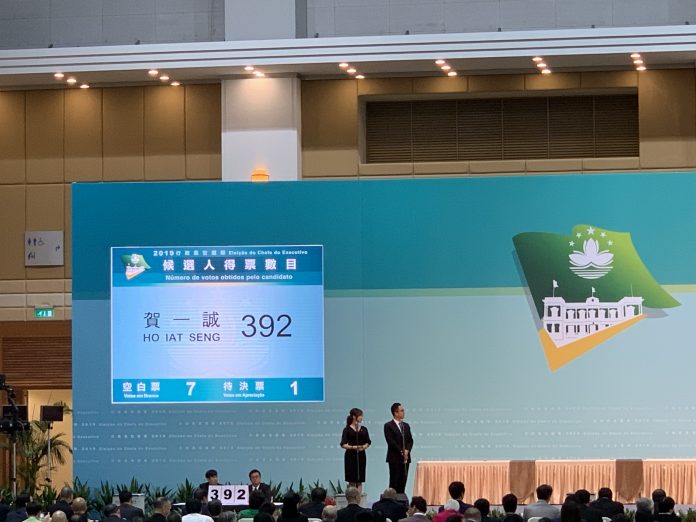 Chief Executive (CE) Electoral Committee member and lawyer, Miguel de Senna Fernandes, stated today that he believes the seven blank votes given in this year’s CE election were emblematic of a request for political reforms in the CE electoral system from both the CE Electoral Committee and residents.

The Chief Executive-elected, Ho Iat Seng, gained a total of 392 votes from 400 CE Electoral Committee members in the CE election today, with seven blank votes and one invalid vote.

In the last CE election in 2014, Fernando Chui Sai On had obtained the favor of 380 members, 13 blank votes and three invalid votes.

“Macau residents expect for the universal suffrage of CE election under the current laws and the Basic Law. Macau society is relatively conservative but I hoped it could be more open in the future. […] I hoped Mr. Ho could be strong, certain and courageous addressing not only in social issues but also in political reforms,” the lawyer said.

Miguel de Senna Fernandes hopes that the CE-elected will give the public clearer ideas and messages on political reforms as well as having an open-heartedly discussion with residents.

The former Secretary for Economy, Francis Tam Pak-yuen, was one of the CE Electoral Committee members this year and added that he believes the CE-elected has the ability to lead the new term of government toward an optimal result.

He underlined that the gaming industry, as well as the economy in the city, had built a good foundation in the previous years, so any difficulties would not impact on the steady development in the city.

Another CE Electoral Committee member, the former Secretary for Social Affairs and Culture and the Commissioner of Commission Against Corruption (CCAC), Cheong U, hoped the new government to have more knowledge about the current situation in the society, as he believed the improvements in certain laws in the past few years increased and strengthened the government’s integrity.

Ho Teng Iat, Ho Iat Seng’s elder sister and member of the National Committee of the Chinese People’s Political Consultative Conference (CPPCC), hopes her younger brother will do every he can to fulfill his commitment and live up to CE Electoral Committee’s expectations.