The Sino-European investment deal has been put on hold by the European Parliament following tit for tat sanctions. However experts believe it is set to be brought back to life considering the mutually beneficial nature of what was agreed in principle

It’s the politics. Or, one might say, the geopolitics. The European Parliament suspended the approval procedure of the EU-China Comprehensive Agreement on Investment (CAI), which was agreed in principle in late December, after sanctions first launched by Brussels and then by Beijing in retribution. Days after the vote, the Institute of European Studies of Macau in cooperation with the United Nations University Institute on Comparative Regional Integration Studies (UNU-CRIS), Fortunius Society and NEOMA Business School held a webinar on May 25, bringing together experts on EU-China relations to discuss CAI and what lies ahead for Sino-European ties.

The webinar’s first speaker, Member of the European Parliament (MEP) Margarida Marques has been following the negotiations and review of CAI with a close eye as a member of the EP’s Committee on International Trade (INTA).

Ms Marques, a former Portuguese junior minister for European affairs, underlines what was achieved during the seven-year-long negotiation period as “China made unprecedented concessions and commitments on market access, in crucial sectors such as new energy vehicles, cloud and financial services or health as well as sustainability”, including the ratification of key International Labour Organization Convention provisions, leading to a “balanced” outcome as both sides made concessions in the context of political will to reach an agreement under the German Presidency of the EU. In the end, should CAI move forward, “European investors in China will have the same conditions Chinese investors have in Europe”, being translated into a situation akin to a level playing field.

Even before the sanctions saga, the EP had said out loud that approving CAI wouldn’t be a stroll in the park. A number of MEPs said that they could demand new compromises such as adoption of international procurement requirements or a supplementary agreement on human rights. With the EP resolution condemning the sanctions imposed by Chinese authorities on European MEPs and entities and the decision to freeze the review process of CAI, additional obstacles are on the way of the ratification process and the EP demands Beijing to lift the sanctions before MEPs bring back the agreement to the table.

The stalemate in EU-China relations is the result of misjudgement and geopolitical factors, among other issues, according to some of the experts participating in this webinar. First, the EU joined the US, Canada and the UK in imposing sanctions against Chinese officials involved in alleged human rights violations in Xinjiang, allegations that have always been clearly denied by Beijing. Then China placed sanctions on MEPs, think tanks and members of the EP’s Subcommittee on Human Rights and its Political and Security Committee. Some European scholars and experts involved in EU-China dialogue platforms are worried about the impact of the sanctions in the wider Sino-European linkages.

Brussels-based specialist and advisor Shada Islam finds it regrettable that a “dark cloud has fallen into this relationship”. One thing for sure is that the “EU, the West, has never actually had to deal with an economic giant like China”.  The scope of the countersanctions launched by Beijing indicate that “China seems to have misjudged the mood in Europe”, Shada Islam highlights, while noting that think tanks being targeted poses an additional problem as they are “a key channel in this dialogue”. Despite acknowledging that this is a “very difficult conversation”, Ms Islam, founder of global strategy and media advisory company New Horizon Project, takes some comfort from the fact both German Chancellor Angela Merkel and French President Emmanuel Macron remain committed to CAI and economic relations with China.

How to untie the knot? How to overcome the geopolitical conundrum?  There is no easy fix for the imbroglio, but participants in this webinar hint at a pragmatic approach by the different stakeholders to move CAI forward.

Mutual respect and a stronger focus on the common ground are critical aspects for Bernard Dewit, chairman of the Belgian Chinese Chamber of Commerce. Europeans have to deal with countries with other sets of values and systems, however “there is a tendency from our side to teach others”, Mr Dewit underlines before signalling: “Maybe we should have more modesty”. While expressing hopes that sanctions on both sides are lifted and dialogue is resumed, the Belgian legal expert predicts that “CAI will reborn with some adaptations and changes”.

Another speaker in the webinar, Paulo Canelas de Castro, Jean Monnet Chair and Associate professor at the University of Macau’s Faculty of Law, points to the need to underline the realistic scope of CAI. And this approach highlights a number of achievements carried out throughout the negotiation process, which lasted for seven years and resulted in the agreement in principle. “The commitments that China has made both in general and specific terms on sustainable development, labour relations, Legal instruments for enforcement are really innovative for China and also for many other actors in the world”, Professor Castro underscores, while stating that “it is important not to lose sight of what was achieved here and in a sense to return to a strategic vision which was a propeller of all this”.

Looking ahead, this scholar who is one of the top Macau-based legal experts on European affairs, calls for a return to modesty, noting that CAI is what the EU has been arguing for a long time as itself being a kind of laboratory for experiments at a global level. “With this agreement (CAI) the EU did stand a chance of experimenting solutions which are innovative for the world’s global governance”.

In the eyes of Carmen Amado Mendes, Professor of International Relations at the University of Coimbra, Portugal, and president of the Lisbon-based Macau Scientific and Cultural Centre, “once the rhetoric has abated, there are still strong reasons for the EU to cooperate more closely with its prime trading partner”. In a scenario of US authorities blacklisting Chinese firms, CAI is understood “as permitting Europe to position itself as the recipient for a new wave of Chinese investment”. Nevertheless, Professor Mendes concludes that it will not be feasible simply to return to the past or “improve cooperation in trade within the existing framework without increased transparency”. In other words, “While many of those in the EU Parliament who voted for the motion are positive towards developing a new framework, it is now perfectly clear that there is a resolve that it will not be at the price of fundamental European values”, the Portuguese scholar analysed.

The depth of economic relations between the two giants is massive and there is a significant level of trade and investment interdependence. EU-China relations are therefore marked both by competition and complementarity. Over the past decade Chinese investment in Europe, in terms of stock, skyrocketed, witnessing a four-fold jump between 2013 and 2019. After a reaching a peak level in 2016, Chinese new FDI in Europe declined in line with downward trajectory of China’s global outbound investment since then. Zhang Haiyan, an expert in Chinese investment in Europe and Associate Professor at France’s NEOMA Business School, noted that while remaining a strategic partner, “EU’s importance for China is declining” as Beijing is focusing more on regional trade partners. 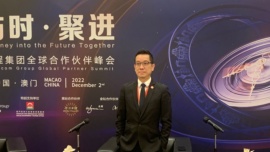