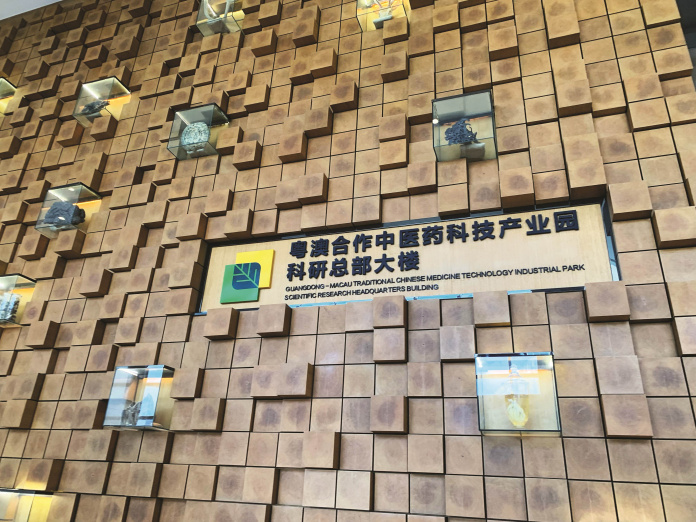 Four months after the inauguration of the Guangdong-Macau In-depth Cooperation Zone, businesses and institutions are as committed as ever to developing the four major sectors in Hengqin and narrowing down the differences between the systems of the two places as envisioned in the master plan of the zone.

While we still have to wait and see what innovative rules and measures the authorities will gradually come up with for the development of the newly established Guangdong-Macau In-depth Cooperation Zone in Hengqin, businesses, investors and institutions from Macau have made the first move in exploring the opportunities arising from the nearby 106-square-kilometre island — and some have started to yield initial outcomes.

Following the inauguration of the cooperation zone in September, in which both the Guangdong and Macau administrations co-govern the future development of the place, the monthly tally of newly incorporated companies in Hengqin averaged about 600 in the first three months, higher than the average monthly level in 2020, latest official figures show. Overall, there are over 55,000 companies incorporated in Hengqin at the moment with more than 4,600 firms backed by the Macau capital.

Among the new firms between September and November, over two-thirds of them were involved in the four sectors that have been flagged as the major industries of the cooperation zone — scientific and technological research and high-end manufacturing; traditional Chinese medicine (TCM); cultural tourism, convention and exhibition, and trade; and modern finance.

Prior to the inception of the cooperation zone, the TCM sector has long been regarded as a key segment in Hengqin. Both the authorities from the two sides have been developing the Traditional Chinese Medicine Science and Technology Industrial Park of Cooperation between Guangdong and Macau (GMTCM Park) on a 500,000-square-metre land parcel on the island since 2011, with an aim of expediting the industrialisation and internationalisation of TCM as well as facilitating the diversifications of Macau.

A representative from the GMTCM Park said 216 firms are registered in the incubation area of the park at the moment — which was set up in 2018 — including 52 companies from Macau in the areas of TCM, cosmetic products, healthcare products, healthcare services and medical engineering. Promoting the development of TCM products abroad, the industrial park has helped the successful registration of nine TCM products from six Mainland Chinese and Macau pharmaceutical firms in Mozambique, the representative revealed.

Concerning the three main tourist offerings of the park — which includes the Ruilian (Hengqin) Wellness Resort, a themed hotel and resort facilities about a healthy lifestyle and the demonstration of TCM culture; the Traditional Chinese Medicine Technology and Creativity Museum; and the Ola Lotus TCM cultural district — the representative noted that the three projects “have basically been completed” but that the operational dates are yet to be decided.

According to the master development plan of the cooperation zone, TCM, food and healthcare products manufactured in Hengqin and registered in Macau will be permitted to bear the signs of “production supervised by Macau” or “design by Macao” in the future, as the cooperation zone serves as “the world’s premium traditional Chinese medicine product manufacturing base and innovation high ground”.

Macau Authenmole Biotech — a TCM firm specialising in research and development, production and sales of herbal tea, plant extracts and other healthcare products — looks forward to the business prospect laying in store in the cooperation zone. The firm is a joint venture between Guangdong Authenmole Biotech Inc. and Macau investors, including local prominent entrepreneur and former legislator Chan Meng Kam and former Legislative Assembly President and businesswoman Susana Chou.

“Both Mr. Chan and Ms. Chou are supportive towards the modernisation and internationalisation of the TCM industry,” Sunny Zhou, a representative of Macau Authenmole Biotech, says.

The joint venture has had an established presence in the GMTCM Park since 2020 and has run an unmanned production plant in the park since September 2021 with a reported investment of about RMB50 million (US$7.85 million/MOP63 million) in equipment. All the steps in the manufacturing process from ingredient extraction to product packaging to storage in the Hengqin factory are automatic with just a few people monitoring the process in the control room, Ms Zhou explains, adding the manufacturing base now could extract over 500 types of TCM ingredients with its patented technology PLEESIT (plant low-temperature extraction and efficient separation and integration technology).

This manufacturing base of Macau Authenmole Biotech is among the 12 major projects that were introduced by the Executive Committee of the cooperation zone — a co-governing body formed by Guangdong and Macau officials — on 6 December to showcase the initial outcomes of the zone in the first three months. The remaining 11 projects concern the areas of biomedicine, integrated circuits, and modern finance among others.

With the business scope of Macau Authenmole Biotech focusing on B2B (business-to-business) at the moment, Ms Zhou adds the Hengqin project could be one of the model examples for “the standardisation, industrialisation and modernisation of the TCM sector”.

The master development plan of the cooperation zone also underscores the importance of offering more career and personal development opportunities for Macau residents in the nearby island. “Professionals in the fields of finance, construction, urban planning, design and others with Macau licenses could practice in the cooperation zone, after matching the requirements of the governing bodies of the industries,” the plan details.

Some Macau professionals have already devoted themselves to the island for some time. Latest official data show there are 589 tourist guides, 57 construction companies and 269 professionals in the construction field from Macau and Hong Kong that could serve in Hengqin, as well as 53 Macau doctors and seven Macau social workers.

The Closer Economic Partnership Agreement (CEPA) – a free trade agreement between the mainland and Hong Kong or Macao established since 2004 – has also enabled legal professionals from the two special administrative regions to create joint ventures with mainland counterparts, offering legal services to clients on the mainland. Thus, it’s no wonder why Hengqin, which is deemed a new high ground for promoting development of the Guangdong-Hong Kong-Macau Greater Bay Area, boasts several joint-venture law firms among the three places.

One of them is ZLF Law Firm, a joint venture constituted by Beijing-based Zhong Yin Law Firm, Hong Kong-based law office Fongs Lawyers, and Macau-based Rato, Ling, Lei & Cortés Lawyers. Established in January 2016, it is the first office in the country that gathers legal expertise from the three sides in the same place.

In operation for almost six years, the law firm now features about 32 lawyers, including four from the mainland, 11 from Macau and 17 from Hong Kong. “The main service we have so far catered for our clients is to help them resolve problems in the economic fields like problems concerning their cross-border investments,” says Chen Yi, lawyer-cum-senior partner of ZLF Law Office, which serves dozens of clients a year and records an annual revenue of about RMB40 million.

“Our Macau lawyers mainly focus on providing services for those mainland clients who have invested in or are interested in Portuguese-speaking countries like Brazil and Portugal,” she says, expecting the business volume of her office could continue to expand over the development of the cooperation zone and the more frequent exchanges in the region.

Ms Chen also reveals that the ZLF Law Firm has provided consultancy and research service for the authorities in Macau and the mainland about the rules and regulations of the cooperation zone, which have to tackle two different legal systems. “The general trend, at least in the civil and commercial areas, is to introduce and apply more Macau rules in the cooperation zone… such as company registration and establishment, legal matters concerning trade, marriage and inheritance,” she says.

Some cases in the Hengqin court have already been undertaken and decided with Macau regulations. “Those cases are about disputes between Macau-based banks and their Macau clients that have assets in the mainland,” Ms. Chen explains.

On December 6 a ground breaking ceremony for the “second-tier” customs facilities in the cooperation zone was held, marking the start of the RMB597-million works across seven locations on the island. With the works expected to finish by end-June 2022, this would expedite the implementation of the principle of relaxing the “first-tier” movement of goods and people and ensuring the usual “second-tier” strict customs control as pinpointed in the development plan of the zone. The “first-tier” refers to the movement of goods and people between Macau and Hengqin, while the “second-tier” refers to the movement between Hengqin and other parts of the mainland.

Ms Chen believes the border policies between Macau and Hengqin will open further in the future, allowing both Chinese and non-Chinese residents in Macau to visit Hengqin more easily and conveniently. A similar vision was also advanced by Macau Chief Executive Ho Iat Seng during his annual duty visit to Beijing in December for work meetings with President Xi Jinping and Premier Li Keqiang. The city’s top official hopes that the city’s public transportation, including bus and taxi, could reach Hengqin in the future, providing more convenience for residents to travel to and fro between the two places.

As technology and research is one of the major focuses in the cooperation zone, local universities such as the University of Macau (UM) and the Macau University of Science and Technology have set foot in the nearby island in recent years to expedite the development in the respective fields. The Zhuhai UM Science & Technology Research Institute (ZUMRI) was established in Hengqin in 2019, the first industry-education-research demonstration base in the Greater Bay Area.

“It’s not that simple for scientific and technological achievements to be applied to daily life, which takes time, skilled professionals and money,” says Jason Chung, manager of ZUMRI. “What our Institute does exactly is to serve as a platform to accelerate this transformation process of scientific and technological achievements… and expedite the collaboration between businesses and academia.”

With about 60 postgraduates, research assistants and staff, the ZUMRI had 105 on-going projects subsidised by the mainland authorities as of September 2021, Mr Chung says. “Scientific research and technological advancements were not really the focus of Zhuhai or Macau in the past,” he says. “But following the inception of the Greater Bay Area and the cooperation zone, these have gained traction in the region.”

*The reporter took part in a visit to Hengqin on 9-10 December, which was organised by the Liaison Office of the Central People’s Government in Macau for representatives of the local English-language and Portuguese-language media outlets. Part of the information and interviews in this article were done and collected during the visit.

May 23, 2022
The SAR government will complete the construction of the east line of the Macau light...
Load more