Cabo Verde’s capital, Praia, is to see one of the largest private investments in the country, with €250 million to be spent building six hotels with a combined 1,000-plus rooms and a marina on Gamboa beach, generating 1,200 jobs, according to a government resolution that Lusa has seen.

Plans for the ‘Gamboa Plaza Shopping & Hotels’ project, cited in the 28 December resolution, were agreed between the state and the private developers, in a 15-year deal that foresees the start of activities within 12 months in a huge tourist development on a seaside site covering 13,987 square metres.

The agreement on the plan, which is to be overseen by businessman João Fernando Freire, grants the developer tax incentives that include a 100% exemption from taxation of profits during the first five years of operation after completion – which should take eight years – after which the exemption is to fall to 50%.

“The Government of Cape Verde considers the ‘Gamboa Plaza Shopping & Hotels’ project to be of great value, and therefore declares it to be of exceptional interest in the framework of its socio-economic development strategy for the country, taking into account the impact it will have in terms of investment, employment, professional training, the wealth it will generate, an increase in tourism and the quality and quantity of national accommodation capacity,” reads the cabinet resolution approving the deal.

The project is to be developed in two phases, the first of which foresees the creation of 400 jobs and investment of €70 million, more than 90% of it to be spent on the construction of two four- and five-star hotels, with a total of 419 rooms and “whose management contract has already been signed with an international company”.

There is also to be a marina for 150 pleasure boats, the restoration of the old quay, the construction of restaurants, bars, a swimming pool and an aquarium. The first phase also foresees the restoration of Gamboa beach, in the centre of the city, with the laying of white sand, coconut and palm trees, two car parks with capacity for 236 vehicles and a public mini-golf course.

The second phase is estimated at €180 million and is to generate a further 800 direct jobs, with four more four and five-star hotels to be built, with a maximum capacity of up to 800 rooms, in addition to supporting infrastructure.

In recent years, tourism has accounted for 25% of Cabo Verde’s gross domestic product, but the activity has been all but at a halt since March due to restrictions imposed to contain the Covid-19 pandemic. In 2019, the archipelago received a record 819,000 tourists, but the figure fell to just over 300,000 in 2020.

March 3, 2021
Moscow hit back at Western countries Wednesday for sanctioning senior Russian officials over the poisoning...

March 3, 2021
Six Italians and a French national have been remanded in custody over a violent weekend...

March 3, 2021
Germany on Wednesday took a step towards forcing companies to take responsibility for any labour... 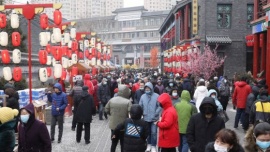