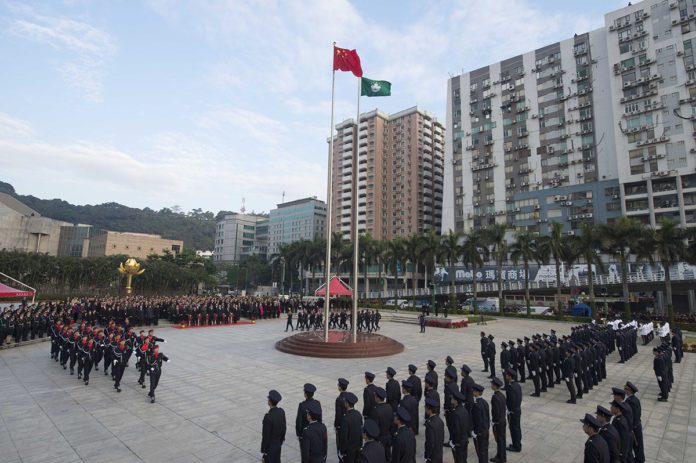 He made three main points on the basis of the “successful implementation” of the Macau Basic Law. First, the Basic Law of Macau can be “accurately” implemented under the circumstances that the society has developed a “comprehensive identification” with the nation.

Second, Macau’s long-term prosperity and stability are built on the foundation of “maintaining the nation’s sovereignty, security and developmental interest.” Third, Macau has a rosy prospect if it can be integrated into the nation’s “governance system” and “developmental blueprint.”

On the “accurate implementation” of the Macau Basic Law, Li expressed four expectations. First, Macau will be governed strictly in accordance with the Chinese constitution and the Macau Basic Law. Second, Macau’s “high degree of autonomy” and the central government’s “comprehensive jurisdiction” over Macau will be implemented in accordance with the law.

Third, the mechanisms for protecting national security will continue to be built. Fourth, the propaganda and promotion of the Chinese constitution and the Macau Basic Law should be continued and strengthened.

It can be said that both Hong Kong and Macau are so different in terms of the context and content of governance that both places are bound to diverge, rather than to converge.

First and foremost, Macau’s “successful” implementation of the Basic Law is based on the historical context that the citizens of Macau are overwhelmingly identifying strongly with mainland China, both culturally and politically. However, Hong Kong’s citizens are culturally identifying with China, but many of them do not have political identification with the mainland regime. This makes Hong Kong far more politically resistant to Beijing than Macau.

Historically, Macau’s society was pro-mainland as early as the Second World War, when Macau remained politically “neutral” under the Portuguese rule and when many citizens sided with either the Chinese Communist Party (CCP) or the Kuomintang (KMT) in the mainland.

This divided society persisted after the end of the Second World War until 1966 when a riot stemmed from a dispute over the construction of a school in Taipa Island led to the apology of the Portuguese administration for its handling of the controversy. One of the demands from the CCP that was eventually accepted by the Portuguese administration was to eliminate the KMT groups and influence in Macau. As a result, the 1966 incident brought about a political environment in which pro-CCP or pro-Beijing forces have become stronger and stronger.

This situation was the contrary in Hong Kong in 1967 when the Cultural Revolution in China led to the British colonial government’s suppression of the CCP activities in the British colony. The pro-Beijing forces were under tight control until the early 1980s when the Sino-British negotiations over Hong Kong’s future triggered a return and rejuvenation of the pro-Beijing forces.

After the handover, Macau has remained far more politically patriotic toward Beijing than Hong Kong. The rapid growth of democracy movement in Hong Kong, ranging from the 2003 opposition to the enactment of Article 23 of the Basic Law to the 2014 Occupy Central movement, and from the 2016 Mongkok riots to the anti-extradition movement in 2019, has all illustrated the persistence of strong anti-CCP forces.

As such, it will take a long time, perhaps at least two to three decades, for Hong Kong to develop a strong patriotic sentiment toward China as with Macau.

The Macau-nization of Hong Kong has been consistently rejected and resisted by a large number of Hong Kong people. In June 2019, many lawyers in Hong Kong saw the extradition bill as a menace to the rule of law.

Third, while Beijing sees the “organic” co-existence between the central government’s “comprehensive jurisdiction” over Hong Kong and the territory’s autonomy, this belief has been, and is, rejected by many Hong Kong people. Unlike the CCP leaders and officials who adopt a dialectical view of “comprehensive jurisdiction” and local autonomy, many Hong Kong people see the two concepts as a zero-sum game.

Many Hongkongers regard Beijing’s exercise of “comprehensive jurisdiction” as undermining local autonomy. This ideological difference between the two places means that any attempt to Macau-nize Hong Kong is bound to encounter bitter resistance, opposition and even violence, as can be seen in the ongoing anti-extradition and anti-police movement in Hong Kong.

Fourth, although Beijing’s leaders hope that, through education and publicity as well as propaganda work, Hong Kong people would become more politically patriotic in the long run, the reality is that it would take at least two to three decades to transform the mentality of many Hong Kong people.

Fifth, the civil society in Hong Kong is far more assertive and critical, politically speaking, than its counterpart in Macau. Composed of a large and financially independent middle class, Hong Kong’s civil society is confrontational vis-à-vis the post-colonial state.

Yet, the Macau civil society remains relatively weak; local lawyers are politically docile; and many middle-class citizens come mainly from the gaming sector and the civil service, thereby failing to be an independent political force that constitutes any effective checks and balances against the local government. Although a small number of middle-class liberals have emerged in Macau in recent years, they remain numerically weak.

Politics in Hong Kong have become gradually overdeveloped since the 2014 Occupy Central Movement, but politics in Macau remain frozen and underdeveloped.

In short, it is understandable that Beijing wants Hong Kong to learn from and imitate Macau. But the Macau model cannot be and will not be easily transplanted into Hong Kong due to the historical differences between Hong Kong and Macau, the varying political cultures of the citizens in the two places, the vastly different views of local autonomy, the educational divergence in the two cities, and the underdeveloped civil society of Macau versus the overdeveloped civil society of Hong Kong.

The overdeveloped polity of Hong Kong means that it cannot be, and will not be, easily frozen like the case of Macau.

June 25, 2022
More than 2,000 sub-Saharan migrants tried on Friday to breach the border between Morocco and...