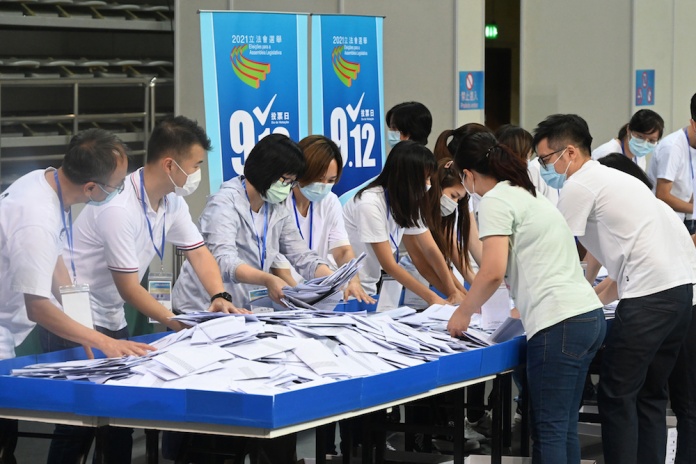 Turnout for the 2021 Legislative Assembly direct election was even lower than projected, with analysts telling Macau News Agency that most of the electorate left “orphan” by the disqualification of most of the pan-democrat candidates seems to have chosen to not take part in the election.

Only 42 per cent of the total 323,907 registered voters cast their vote on the election date, the lowest rate reported since the establishment of the Macau Special Administrative Region in 1999.

Some 3,151 blank votes were also cast in this election, almost triple the amount in 2017 and with 2,082 votes declared null.

As the political scientist Sonny Lo Shiu Hing put it to MNA, the disqualification of many moderate democrats who were deemed as violating the national security and election law, turned the 2021 AL election into the most ‘bland in Macau’s history.

“The lacklustre election reflects the changed political atmosphere of Macau which was unfortunately affected by the political chaos, turbulence and fighting in the Hong Kong special administrative region,” Lo noted.

Prior to the election, the EAC decision disqualified 21 legislators – 15 from the pan-democratic field including incumbent legislators Ng Kuo Cheong and Sulu Sou Ka Hou – based on evidence provided by police authorities that they did not uphold the Basic Law of Macau or pledge allegiance to the Macau SAR, a decision later backed by the Court of Final Appeal.

Electoral Affairs Committee Chairman, Judge Tong Hio Fong, dismissed the impact of the disqualifications and attributed the low turnout to the Covid-19 pandemic and to the “very hot weather on Sunday and the occurrence of thunderstorms” generated by typhoons impacting the region.

Eilo Yu, Associate Professor at the Dept. of Government and Public Administration of the University of Macau (UM), told MNA that initially, he believed voter turnout would reach around 50 or a bit below, as he was expecting at least half of the pro-democracy voters might not turn out, but the actual voter turnout was even lower than expected

“You can see that in the past election the pro-democracy candidates received about 33,000 votes, but this time the number of votes dropped by about 27,000. We also had about 5,000 invalid votes so I think the disqualification issue generated a higher impact than we even expected before,” Yu added.

While some of the pro-democrat votes could have seeped into the Jose Pereira Coutinho or Ron Lam U Tou lists, most of the voting block seemed to have simple been absent from the election.

The Macao United Citizens Association managed the highest vote tally of the election night, more than 26,593 votes or about 20 per cent of the total, and repeated the feat in 2013 when the Fujian community-linked group managed to elected three candidates.

Incumbent legislators Si Ka Lon and Song Pek Kei were re-elected, with Lei Leong Wong – the youngest elected candidate on the race – to join in the new legislative assembly session for the list backed by business heavyweight, Cham Meng Kam.

“Does this mean a return of Chan Meng Kam to the political scene of Macau?” Yu questioned.

The Union for Development collected some 23,760 votes with the association connected to the Macau Federation of Trade Unions (FAOM) re-electing incumbent legislators Ella Lei Cheng I and Leong Sun Iok, with the lists linked to the General Union of Neighbors Association of Macau, the Macau Women’s General Association and the Macau Jiangmen Communal Society also electing tow legislators.

Having served in the AL since 2005, Jose Pereira Coutinho will also again head for the AL after his New Hope list gathered the highest vote tally in its history, more than 18,232 votes, with the list linked to the public sector the first time standing in the top three lists with the highest number of votes.

Meanwhile, the biggest surprise of the night was the failed re-election bid by legislators Agnes Lam, who after winning her seat the first time in 2017 with 9,590 votes, after her Civic Watch receive only 3,729 votes.

“At the beginning, we believed the disqualifications could lead to an increase of votes to the so-called ‘moderate or middle-ground candidates’ but in the end, Agnes Lam was not elected,” Professor Yu told MNA.

While Lo considered that the defeat showed that Lam’s voter base simply did not vote, for Professor Yu, this result is more an indication of the difficulty of the middle ground approach chosen by Agnes Lam than any failings as a legislator.

“Some pro-democracy supporters always criticised Agnes Lam while some of the pro-establishment forces may not consider her as part of that sector. In the beginning, the middle ground camp was trying to bridge the pro-establishment and opposition forces, but it seems the gap is going to be bigger, which generates little room for any politician to bridge them together,” Yu considered.

The political researcher believed this was a warning sign to Ron Lam U Tou, who in a sense replaced the legislator in the so-called ‘moderate’ or ‘middle ground’ camp after his Power of Synergy managed a record-best final vote tally of 8,763 to elect a candidate for the first time.

A former FAOM Social Affairs Deputy Director, Lam graduated in environmental sciences, worked as a journalist, and headed the Choi In Tung Sam Association where he conducted several studies and surveys on public policies, with an emphasis on housing.

“Ron Lam got elected this time and he made a bit of progress by getting about 1500 votes more than last time, perhaps showing some voters who were formerly pro-democracy turned to vote for him,” Sonny Lo told MNA.

At the same time, Eilo Yu noted that the current political atmosphere seems to not be able to accept or tolerate politicians that try to fulfil the middle ground role and this could be a concern for Ron Lam.

“Even though he was elected this time, how could he survive in this kind of environment? How strong can he check and balance the government and maintain his credibility in this environment? Is not that easy,” Yu considered.

In the end, Sonny Lo considered the election an “electoral triumph” for “political conservatism” and traditional pro-establishment lists, with the so-called moderate pro-democratic or opposition camp left with only three legislators, Coutinho, his running mate, Che Sai Wang, and Ron Lam.

“Coutinho, of course, received two seats but overall we only have three legislators not regarded as the traditional pro-establishment forces, while in the past we had about five, with the pan-democrats, Coutinho and Agnes Lam. I thought they could get more than five seats, in the end, it seems they can only get three,” Yu added.

September 27, 2021
Airbus Summit unveils the 'flying taxi', also known as a giant drone, which can carry...

September 27, 2021
New Zealanders are continuing to step up, come forward and get vaccinated, with 5 million...
Load more