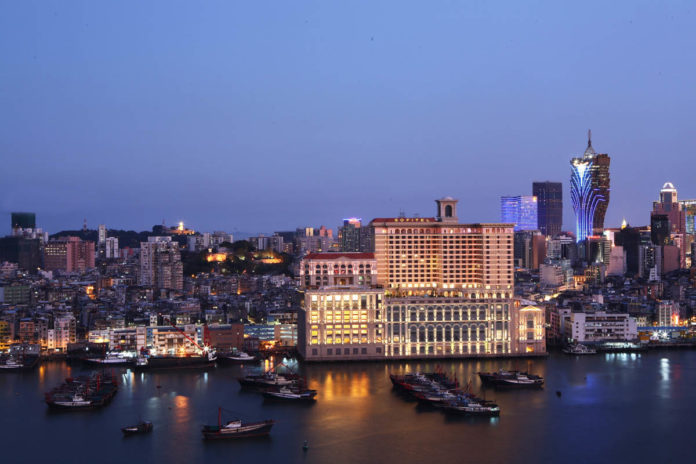 Though the city’s economy is likely to finish this year with the first annual contraction in three years, over the gaming woes and global economic uncertainties, there’s cautious optimism next year, provided the committed efforts in public infrastructure by the government to ramp up the economic fundamentals.

Following a decline of 3 percent in the gross domestic product (GDP) in the first half of 2019, the economy of Macau deteriorated in the third quarter, with a retreat of 4.5 percent from the previous year, extending the downward trend into three straight quarters.

Attributing the drop mainly to “a larger decline in exports of services” — namely, the gaming sector in which the gross gaming revenue went down 4.12 percent in the third quarter — the Statistics and Census Service noted in a statement that that the external demand of the territory “continued to slow,” while the domestic demand “decreased at a slower pace.”

“The dwindling exports of services are mainly due to the macroeconomic factors from the trade war between China and the United States to the depreciating yuan to the ongoing incident in Hong Kong,” said Samuel Tong Kai Chung, President of Macau Political Economy Research Association.

The incident refers to the months of unrest and confrontational scenes in the nearby Asian financial centre over an extradition bill, now-shelved since June, which have deterred some Mainland Chinese — particularly those coming under package tours — from visiting the two special administrative regions.

“Although the visitation figure to the city could still maintain in the positive territory, leveraged on the opening of the Hong Kong-Zhuhai-Macau Bridge [since October last year], the mainlanders have spent less,” said Mr. Tong.

Latest official figures show the visitors’ arrivals to Macau inked up nearly 1.8 percent in October, the slowest growth since January 2018, underscoring the spill-over impact from the adjacent SAR. In the first 10 months of 2019, the visitation figure maintained a robust hike of 15.3 percent to over 33.41 million.

The travellers, however, have so far spent less. The total non-gaming expenditures of visitors declined 17.2 percent year-on-year to MOP15.2 billion in the third quarter of 2019, extending the losing streak into three consecutive quarters, according to government figures, while the per-capita spending of mainlanders in Macau also plunged 26.7 percent in the July-September period.

But Mr. Tong sees a silver lining in these sets of gloomy economic data. “The local expenditure was still able to remain positive in the third quarter… underlying a stable domestic demand,” the scholar said.

“The local unemployment rate has also maintained at a low level, between 1.8 percent and 2 percent, showing the resilience of the economy,” he said. “The government has also announced there will be a salary hike for civil servants next year, and gaming operators and other [employers] will likely follow … so the community does not need to be too downbeat about the future.”

While the Macau economy has entered into a technical recession — with the GDP falling for at least two consecutive quarters — the government announced in November the salary index of all the civil servants will increase about 3 percent from the current scale of MOP88 per point to MOP91, while residents will continue to enjoy a cash handout next year — MOP10,000 for permanent residents and MOP6,000 for non-permanent residents.

“The negative trajectory is very likely to continue in the fourth quarter with the sluggish performance in exports of services and capital investment, but I’m cautiously optimistic about the prospect of the first quarter of next year,” Mr. Tong added.

Concerning the city’s economic outlook, International organisations have mixed forecasts. Moody’s estimated Macau’s GDP would contract 2 percent this year because of the slowing mainland Chinese economy (its GDP expanded at the slowest pace in 27 years, at 6 percent in the July-September period) have negatively impacted Macau’s visitation figure, gaming revenue and exports of services overall. But the global rating agency expects Macau will bottom out in 2020, with an annual growth of 3 percent.

But others are more pessimistic. The International Monetary Fund (IMF) expects the city’s GDP would fall 1.3 percent and 1.1 percent respectively in 2019 and 2020, owing to the slowing mainland economy as well as the expected lacklustre performance in private investment over the uncertainties clouding the renewal process of gaming licenses. The city’s six gaming concessions and sub-concessions will expire by 2022, but the government has yet to divulge details on the matter.

Acknowledging the Macau economy is now undergoing a “technical recession,” legislator Joey Lao Chi Ngai emphasises that the underlying fundamentals remain sound. “Given the special economic structure of Macau, which is small and easily subject to volatility, the contraction of GDP in the first three quarters was not particularly high,” Mr. Lao said, who is also president of the Macau Economic Association. “Despite the fact that some micro, small and medium-sized enterprises might have faced operational difficulties, the overall economy of the city has so far been stable.”

As the looming global economic uncertainties continue to linger, the lawmaker believes the government has to step up the public investment to drive the growth. Latest government figures show the public construction investment surged over 131 percent year-on-year in the third quarter, as a result of increased government investment and a lower base of comparison.

“The authorities should accelerate the planning and development of the 85 square kilometres of water territories, as well as the development of coastal tourism facilities and projects,” said Mr. Lao, referring to the central government’s approval four year ago on the demarcation of the water territories of Macau for its economic diversification and regional integration.

“These could also enrich the city’s tourism offerings and enhance the tourism carrying capacity, resulting in the development of the city into a world centre of tourism and leisure,” he added.

The downward pressure in the economy might leave a dent in local home prices, but there’s not much room for downward adjustment over the lack of supply, observers say.

Highly subjective to the economic volatility, the local property market has still managed to remain in an upward trajectory so far this year. According to the latest figures from the Statistics and Census Service, the average home prices here amounted to MOP109,977 a square metre in the third quarter of 2019, up by 5.9 percent from a year earlier and by 2 percent from the end of last year.

The number of home transactions totalled 6,446 in the first nine months of 2019, plunging by nearly 28.9 percent year-on-year, the data said.

“We expect the housing market of Macau will likely continue to slow down in the coming months,” said Tommy Xie, an economist at Oversea-Chinese Banking Corporation Limited (OCBC Bank). “The housing prices… may drop by 1.5 percent year-on-year by end of this year.”

“In the longer term, the housing market correction might be limited due to housing supply shortage,” the OCBC economist added.

The city’s average home price has increased for two consecutive years — 7.5 percent in 2018 and 16.8 percent in 2017 — in the wake of declines in the 2015-16 period, when Macau was plagued with gaming woes over the slowing economy and the anti-corruption campaign in Mainland China.

“The performance of the local housing market has been lacklustre this year, given the slowing economy, the trade war between China and the United States, and other factors,” said Lok Wai Tak, president of the Macau Real Estate Development Association.

“If there’s still no improvement in these factors in the future, I won’t be surprised the home price will stay put or even go down 5 percent next year,” he added.

Albeit the high possibilities of first annual contraction in gaming revenue in three years, many analysts expect the industry could rebound when 2020 is approaching.

Latest figures from the Macau Gaming Inspection and Coordination Bureau show the gross gaming revenue amounted to MOP246.74 billion in the first 10 months of 2019, down by 1.8 percent year-on-year.

The revenue in the mass baccarat segment totalled MOP90.06 billion in the first three quarters of 2019, surging by 20.9 percent year-on-year, but still not enough to offset a steep decline in the VIP segment, official figures show. The gaming revenue in VIP baccarat reached MOP102.91 billion in the January-September period, plunging 17.1 percent from a year earlier.

The headwinds in the casino this year were caused by the economy in China — which has slowed to the lowest growth in almost 30 years — and a depreciating yuan that have made the mainlanders less willing to spend over the backdrop of the lingering trade war between China and the United States.

The Macau government, which holds a more conservative stance in estimates, does not expect the market fundamentals will be significantly improved. According to the 2020 budget plan unveiled in November, the government anticipates the direct tax from casinos will total MOP91 billion next year, remaining unchanged from the forecast for this year and meaning the gaming revenue will stay flat in 2020.

The gaming analysts, however, are slightly more bullish. JP Morgan Securities (Asia Pacific) has stated recently, “there’s a good possibility that 2019 marks a cyclical bottom” for the gaming industry, owing to a lower comparison for 2020 and improved market fundamentals.

Another brokerage, Morgan Stanley, expects the gaming revenue will ink up 2 percent in 2020, with a 13 percent decline in the VIP segment but an 11 percent increase in the mass gaming. “We expect new infrastructure… will help drive mass revenue growth in 2020-21,” the Morgan Stanley analysts noted, referring to, for instance, the opening of the Light Rapid Transit railway by the end of this year.

Brokerage Sanford C. Bernstein Ltd is also upbeat toward the mid-to-long term growth of the sector, highlighting a compound annual growth rate of 9 percent in the 2019-2023 period. “Over the medium and long term, VIP segment growth should be driven by continued expansion of the high-net-worth individual population in China, along with increase in the penetration of gaming in mainland China,” it said in a recent report.

Islamic Jihad launches new round of rockets towards Israel

China on track to loosen traffic control as work resumes

February 24, 2020
When mentally ill patients in Macau lack the capacity to make healthcare decisions, and their...

February 24, 2020
Guangdong province, which borders Macau, today lowered the alert level for the spread of the...

Islamic Jihad launches new round of rockets towards Israel