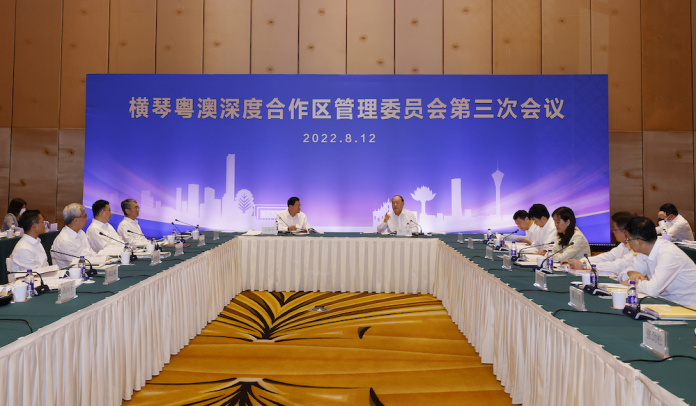 Chief Executive Ho Iat Seng attended the third meeting of the Administrative Committee of the Guangdong-Macao Intensive Cooperation Zone in Hengqin, with attracting investment and talent importation some of the main issues on the meeting’s agenda.

The meeting was held yesterday (Friday) with the Secretary for Economy and Finance of the MSAR and Chairman of the Cooperation Zone’s Executive Committee, Lei Wai Nong, providing an overview of works carried out so far in 2022.

According to a statement issued after the meeting – which was also attended by the Governor of Guangdong Province Wang Weizhong. – the Macau SAR CE raised three main suggestions.

Ho was cited as saying that Ho stated more work should be done to strengthen the integration of Hengqin and Macau, with talent importation efforts needing to align with the needs of the four major targeted industries and be done with a market-orientated approach.

Other suggestions included the promotion of integration of regulations and mechanisms in a pragmatic and efficient way.

In the first half of 2022, tax incentive policies – i.e., regarding personal income tax and company income tax – had been put in place. They were effective in terms of attracting talented people to the Cooperation Zone.

‘By the end of this year, further effort should be made to advance the special regulatory system by tier district, as well as coordinated development planning, and development of financial services,’ the CE was quoted as saying.

The speeding up of construction of major projects in the Cooperation Zone was also addressed during the meeting, such as accelerating construction of customs inspection facilities for “Second-tier” tariff channels and the works for an extension line to the Guangzhou-Zhuhai Intercity Railway and for a high-speed rail connection to the Guangdong-Zhuhai-Macao high-speed rail project.

Guangdong Province Wang Weizhong also stated that it was necessary to make good use of systems relating to delegation of powers and to special relaxed measures regarding market access, so as to provide convenient conditions to live and work in the area for the Macau community.