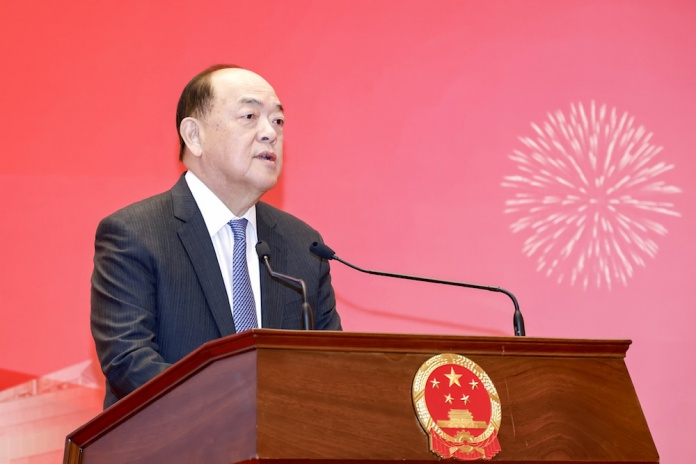 The head of the Macau government denied that the SAR is imposing restrictions on press freedom and expressed that he believes that all ‘media’ are patriotic and love the special Chinese administrative region.

The statements, cited by the Macau Daily (Chinese language media organ), came after a reception in honour of the new commissioner of the Ministry of Foreign Affairs of China, Liu Xianfa, held yesterday (Tuesday).

Ho Iat Seng’s words came after controversy over a directive from the local broadcaster TDM – Teledifusão de Macaurequiring a patriotic editorial line, which forbids the dissemination of information and opinions contrary to China’s policies, but also after the authorities demanded that online news that could be classified as propaganda be omitted on days of reflection and parliamentary elections.

The CE stressed that press freedom was not restricted and that there were no instructions on the matter.

According to Macau Daily, Ho Iat Seng also said he believed that all the media in Macau were patriotic and loved the territory.

Lusa reported that at least five journalists from TDM have resigned following a directive that demands a patriotic editorial line that prohibits the disclosure of information and opinions contrary to China’s policies.

The information was provided by one of the five Portuguese journalists working on the Portuguese language radio service of TDM.

Another journalist confirmed her resignation and that the decision was the result of controversy over the editorial line taken by the company.

Macau will be included in the annual Reporters Without Borders (RSF) ranking, which analyses press freedom in 180 countries, after the threat of “censorship” at TDM, an official from the organisation told Portuguese news agency Lusa.

In the press freedom ranking established annually by the RSF, only Hong Kong was included, which was once considered a bastion of press freedom, but fell from 18th place in 2002 to 80th in 2020, while mainland China is 177th out of 180 countries, on a list that previously left Macau out.

The RSF Asia official added that TDM could become a “propaganda organ” of China due to the “censorship of the management”.

On 10 March, guidelines were issued to TDM journalists, prohibiting them from disseminating information contrary to China’s policies and urging them to adhere to the “principle of patriotism” and “love for Macau”.

The guidelines were criticised in the following days by the Macau Portuguese and English-language Press Association (AIPIM) and the Journalists Union of Portugal, as well as the Macau Journalists Association, which represents reporters from the Chinese-language media.

The controversy led the TDM board to announce last week that the editorial manual of the company will continue to be followed but reiterated adherence to the “principle of patriotism” and “love for Macau.

The handover of Macau’s administration took place at the end of 1999, just over two years after China regained sovereignty over the former British colony of Hong Kong.

The Macau Basic Law, a mini-constitution of the SAR due to be in force until 2049, states that “Macau residents enjoy freedom of speech, press, publishing, association, assembly, and demonstration”.

The two regions have autonomy in all areas except diplomacy and defence.

October 19, 2021
A volcanic eruption on the Spanish island of La Palma which has destroyed large swathes...