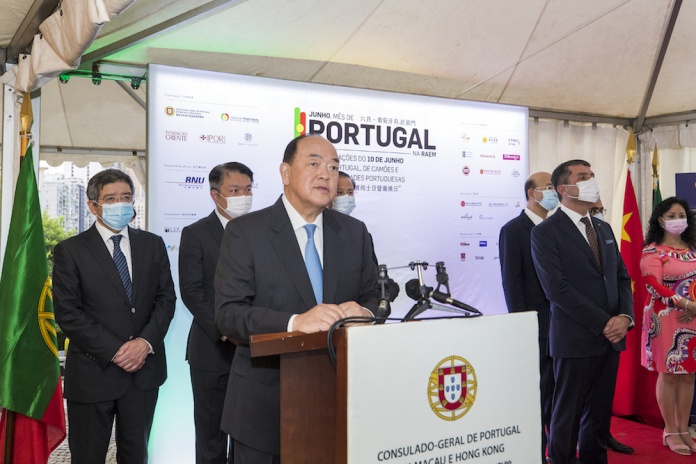 Chief Executive Ho Iat Seng yesterday (Thursday) expressed gratitude to the Portuguese for their contribution to the development of the SAR during the celebrations for the Day of Portugal, Camões and the Portuguese Communities.

“The Portuguese residents here and the Macanese people have always shown a deep commitment and contributed in an exceptional way to enrich the multiculturalism of Macau”, said the head of Government in the usual consular reception to the Portuguese community.

“The Government of the Macau SAR fully recognizes the role of the Portuguese residents here and the Macanese in Macau society, and expresses sincere gratitude to them for their contributions,” added Ho Iat Seng.

The CE stressed that “the harmonious coexistence between different cultures, religions, languages ​​and customs” in the city “is a solid foundation of the «base of exchange and cooperation that, with Chinese culture as predominant, promotes the coexistence of diverse cultures”.

On the other hand, he underlined that “during this period [of the pandemic], all Macau residents, including the Portuguese who live here and the Macanese, in joining efforts, have contributed strongly to the prevention and combat of the pandemic in Macau”

Ho Iat Seng also promised that “the Macau SAR Government will continue to work in strict compliance with the Basic Law, to promote social progress and improve the well-being of the entire population, namely that of the Portuguese community and Macanese”.

Colombia has the world’s largest variety of butterfly species: study

US experts to review heart problems among teens after Covid shots

June 23, 2021
Twitter announced Tuesday that a small flock of high-flying tweeters in the United States will...