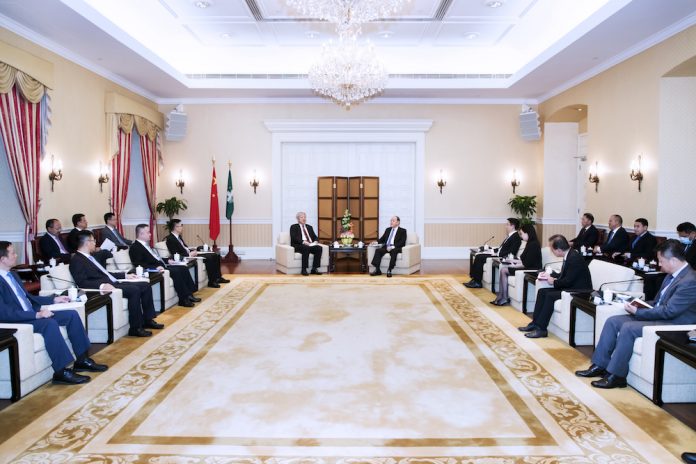 Chief Executive Ho Iat Seng indicated in a meeting held with the Chinese Companies Association that he hopes Chinese companies in Macau will support the development of the securities and financial products market in the SAR, so as to increase the percentage represented by the financial sector in the Gross Domestic Product (GDP).

During the meeting held on September 10, Ho underlined that he hoped the launch of several infrastructure public projects would be a key point to boost the diversification of the local economy in the coming years.

In his first policy address this year, Ho stated that the coming years will be marked by a “golden age” of public works in the city as most integrated resorts expansion and construction projects had been completed.

With the city’s GDP dropping by 58.2 per cent in the first half of the year due to the economic impact of the pandemic, the CE has also expressed the projects could help boost the local economy.

This week the public consultation for the long-awaited new Urban Master Plan was also initiated, with the project to involved several large scale infrastructure developments.

During the meeting, the CE also emphasized that, according to President Xi Jinping’s instructions, the development of the deep cooperation zone between Guangdong and Macao in Hengqin is one of the important paths for local economic diversification, with local authorities expecting all Chinese companies in Macau to strengthen their support for the development of special trade area.

As part of efforts to develop the Greater Bay Area (GBA) into one of the world’s largest economic regions and increase Macau and Hong Kong integration in the region, Chinese authorities have announced a slew of policies aimed at developing Macau into a financial centre.

So far some of the steps announced to develop Macau into that direction include establishing an RMB-denominated exchange in Macau, first to trade bonds issued predominantly by the mainland government and corporate entities, then to develop a NASDAQ-like equity market to enable more high-tech firms in the Guangdong–Hong Kong–Macau Greater Bay Area to receive financing.

However according to some analysts, Macau faces significant challenges to reach this goal and will need to make significant investments in its infrastructure, its supply of qualified professionals, while needing to enact new securities laws that could elevate its status to that of a global financial centre.

Ho also thanked the support of Chinese companies in preventing and fighting the epidemic, by guaranteeing the livelihood needs of the local population, including fresh and living food, cereals, oil, food materials, nucleic acid tests, among others, as well as doing their best to resolve the issue of accommodation of their workers during the epidemic.

The association President, Fu Jianguo, was said to have expressed that this year’s policy guidelines showed an effective implementation of Greater Bay Area development plan, while other association members looked to discuss the planning of New Area Zone A, the East Light Rapid Transit Line and future 5G infrastructure in Macau.