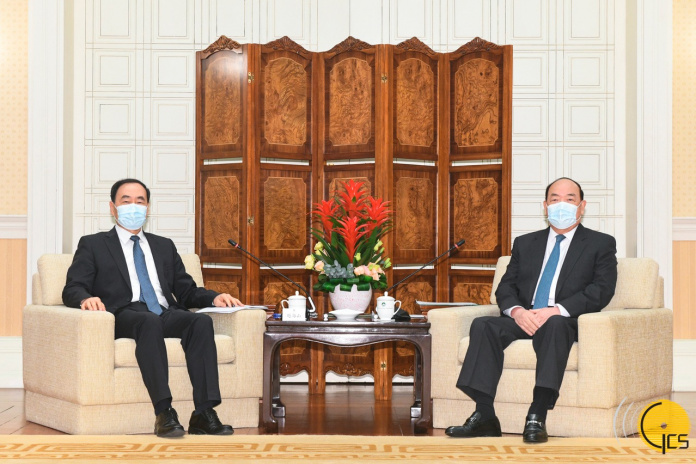 The Chief Executive (CE) Ho Iat Seng met with the Vice Governor of Hubei Province Zhao Haishan, to exchange views on topics including the “big health industry” and economic and trade development.

Yesterday, the CE met with the vice governor of Hubei province Zhao Haishan and several members of the Hubei government’s delegation at the Government Headquarters, with Director of the Policy Research and Regional Development Bureau Cheong Chok Man also participating in the meeting.

The CE said that the development of traditional Chinese medicine and big health industries are at the beginning stage, and the CE hopes Macau can make use of its own advantages, play the role of a platform between China and Portuguese-speaking countries, in order to develop the big health industry.

Also, Mr. Ho indicated that Hubei Province is an important hub in the central region of China and has good space for development, while Macau and Hubei can strengthen cooperation in the future.

The vice governor of Hubei province expressed that Macau and Hubei have always maintained good exchanges, while Hubei has been developing infrastructure projects and promoting the development of finance, technology, education in recent years.

Through the regional advantages of Hubei, the province has maintained a good cooperation mechanism with Macau and strengthened the cultural exchanges between the two places, Mr. Zhao noted.

Many enterprises have also come to Macau to invest, which has contributed to the development of moderate diversification of Macau’s economy, Mr. Zhao said.

December 6, 2022
Ukraine officials in the southern region of Zaporizhzhia said Monday that two people had been...

December 6, 2022
Ghana asked investors to exchange around $9 billion in domestic debt for new bonds on...