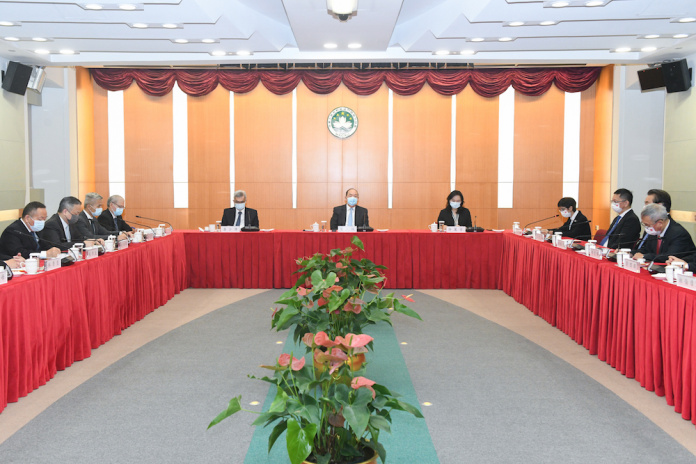 Chief Executive, Ho Iat Seng, has held several meetings yesterday with representatives from the Macau Federation of Trade Unions (FAOM) and the General Union of Neighbourhood Associations of Macau (UGAMM) to discuss the Policy Address for the 2022 financial year.

Following the meeting, the Vice-President of the Macau Federation of Trade Unions and directly elected legislator, Lam Lon Wai, expressed both sides had discussed the new relief measures, with the association requesting more measures for unemployed residents and workers on no-pay leave.

The Macau SAR Government announced on Monday a new round of measures to assist Small and Medium-sized Enterprises (SMEs) and low-income residents struggling with the impact of the COVID-19 pandemic crisis.

The new policy includes a MOP10,000 subsidy to residents who earned less than MOP144,000 last year, as well as all self-employed professionals who meet the requirements.

Lam that measures specifically directed to unemployed residents and employees under no-pay leave schemes were necessary since they were also greatly affected economically.

The association also requested another consumption boost round of some MOP8,000, but noted no direct response to this request had been provided.

Meanwhile FAOM president Ho Sut Heng expressed satisfaction with the eight measures to support SMEs and low-income workers but hoped the government could further enrich the content of those measures and broaden the eligible beneficiaries, in order to ease the economic pressure of more residents.

UGAMM Chairman, Chan Ka Leong, quoted Ho Iat Seng as saying that depending on the overall financial situation of the SAR and discussions with the Secretary of Finance, the general direction of basic economic support measures should remain unchanged, with no cuts on public support for social services, education, and social security.

The CE was also quoted as saying that if there are no more confirmed cases in Macau 14 days after the last confirmed case on October 5, there is a chance that Macau and Zhuhai will resume normal customs clearance.

However, since achieving a high vaccination rate was considered an essential measure to prevent Covid-19 and allow the resumption of normal travel flows, Ho urged UGAMM to help the government in appealing to the population to get vaccinated as soon as possible, in order to meet the conditions for the recovery of the economy and the tourism sector.

The CE even emphasized at the meeting that many provinces and cities in the Mainland are willing to allow tourist groups to Macau however, they have refrained to do so due to the current low vaccination rate in the SAR.

Ho is expected to announce the Policy Address Guidelines for 2022 in November.

October 28, 2021
It's spring in South Africa, and Danie Bester's tillers are rusting in a corner of...
Load more