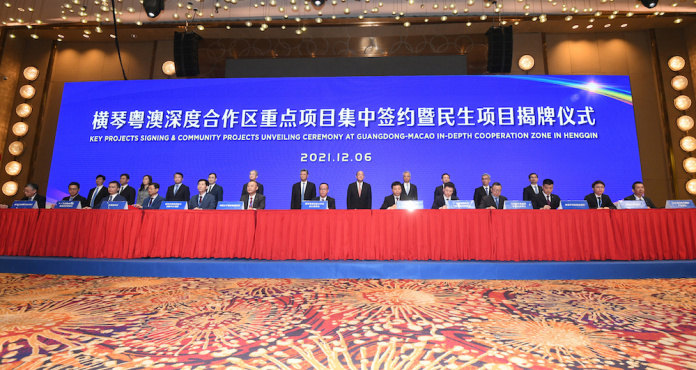 Chief Executive Ho Iat Seng has presided over the signing of 12 key projects in the Hengqin in-depth cooperation zone, of which four will be financed by the Macau SAR.

Ho lead a delegation to Hengqin yesterday for the second meeting of the Administrative Committee of the Guangdong-Macao Intensive Cooperation Zone in Hengqin.

There he presided over the signing of 12 key projects in the Hengqin cooperation zone and the unveiling of the plaque of four civic projects.

The 12 key projects, within which four projects will be financed by Macau, encompass areas such as integrated circuits, electronic information, biomedicine, traditional Chinese medicine, big health and modern finance, while the four civic projects include an application school, a family activities centre, a training base in the area of ​​health and sanitary hygiene, and demonstration posts for basic home support services.

The new Hengqin customs area for the “second-tier” involves a total investment of about RMB597 million and a total of 245,400 square meters.

Secretary for Economy and Finance and secretary-general of the Management Committee and head of the Executive Committee, Lei Wai Nong, pointed out that the cooperation plan ‘clearly indicates the construction of a new system of integration with Macau with a high level of openness, as well as the impulse to liberalize the “first tier” and control of the “second-tier” in relation to the exchange of goods.

The Master Plan of the Development of the Guangdong-Macao Intensive Cooperation Zone in Hengqin was published by the Central Government on September 5, with the member of its administration and executive committees revealed on September 17.

Goods moving inbound and outbound through “first-tier” between the Cooperation Zone and Macau will continue to be subject to registration-based management, to further simplify the customs declaration procedures and elements.

Meanwhile, goods moving from mainland territory into the Cooperation Zone through the “second-tier” subzone will be treated as export, and are subject to value-added tax and consumption tax refund in accordance with the existing taxation policy.

Guangdong authorities previously stated that the customs infrastructure for goods and data exchanges via the future ‘first-tier’ Macau/Hengqin border will also be set in 2022.