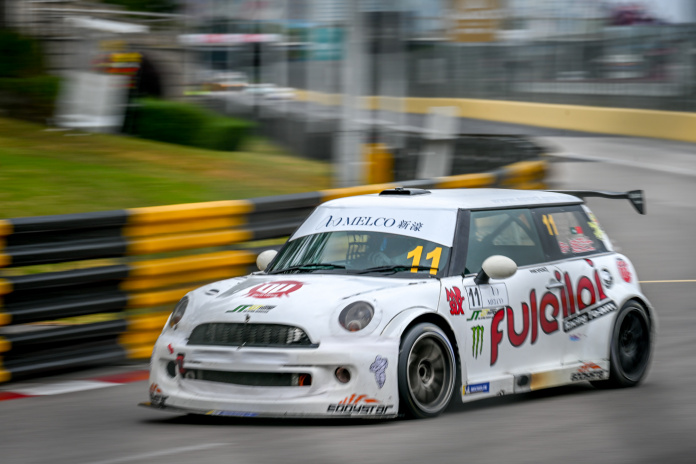 Pole sitter Célio Alves Dias had a good start and keep his distance to front row starter Sabino Osório Lei. Just behind Lui Man Fai and Lam Kam San were battling for the second position. Further back in the field, last year’s class podium finisher Rui Valente had moved from 26th to fifth in just over two laps. After some issues on the warm up lap, race rookie Junio Pereira was also impressing, going from the back of the grid to thirteenth.

On lap 6, the Safety Car was deployed, allowing marshals to safely recover Paul Fan’s Mini and Cheong Chi Hou’s Peugeot. Later in the lap, Sonic Racing Team-run Chevrolet Cruze of Ryan Wong came to a halt, delaying the race restart, but the big drama was yet to come.

Lui Man Fai couldn’t avoid the lost Mini of Célio Alves Dias and hit him hard. Portuguese veteran Rui Valente, who was running just behind and preparing an overtake move to climb to fourth, tried to avoid the chaos in front of him, with his Mini Cooper S ending up crashing badly into the barriers.

Just behind the leading pack, an enormous pile up in R Bend with a dozen cars forced the interruption of race. The Melco Macau Touring Car Cup was not going to be restarted.

Célio Alves Dias, driving the No.11 Mini Cooper S of the Fu Lei Loi Racing Team, was declared the winner of the race. Sabino Osório Lei (Ford Fiesta) and fellow Mini-driver Lui Man Fai were classified in the top three.

Celio Alves Dias, Lui Man Fai and Lin Li have been transferred to hospital for further precautionary checks only.

February 9, 2023
Portugal's prime minister on Wednesday rejected a neo-protectionist development in the European Union, particularly in...

February 9, 2023
Google on Wednesday announced a slew of features powered by Artificial Intelligence (AI) as it...