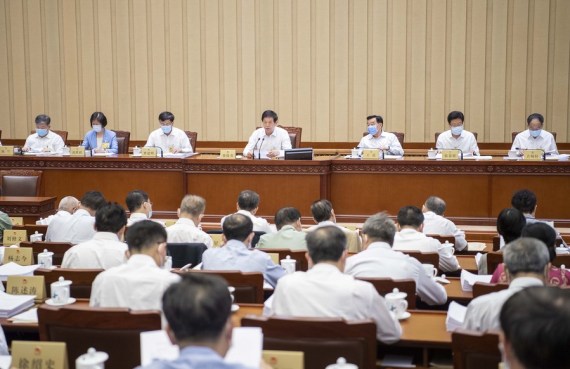 The Standing Committee of China’s National People’s Congress will meet on August 17 and 20 to consider a proposal to apply newly enforced legislation to counter foreign sanctions to the Hong Kong and Macau Basic Laws, broadcaster TVB reported.

According to the report the Standing Committee is set to review a number of national drafts, including the Personal Information Protection Law, Family Education Law, Population and Family Planning in next month’s meeting with a motion to adopt the recent anti-sanction legislation advanced by the central government.

Under Article III of the Macau SAR Basic Law, National Laws can be applied in the SAR, with central authorities having advanced with several pieces of legislation to counter foreign sanctions this year.

In January of this year, China adopted new Rules on Counteracting Unjustified Extra-territorial Application of Foreign Legislation and Other Measures specifically targeting the so-called “secondary sanctions,” that is, a situation where compliance with foreign sanctions would restrict normal economic and trade relations between Chinese persons and companies and third countries.

Under this law, the ministry of commerce can issue a prohibition order stating that specified foreign sanctions should not be executed or observed in China.

Such prohibition orders will have to be observed by the domestic companies and by the subsidiaries of foreign companies in China, and those who fail to comply will face administrative penalties and civil lawsuits in Chinese courts.

The legal framework also allows for Chinese companies to sue other firms for causing damages to them by complying with foreign sanctions.

Then in June 10, the Standing Committee passed new legislation on “countering foreign sanctions”, which empowers the State Council specifically to enact its own sanctions on individual or organizations responsible for formulating, deciding on, or implementing sanctions against China – as well as their immediate family or organizations sanctioned individuals are affiliated with.

Sanctions may include banning entry into China, seizing property or assets within China, and prohibiting business transactions or cooperation with Chinese companies. Organizations and individuals within China are also explicitly prohibited from complying with U.S. sanctions against Chinese citizens or entities

On July 23, the spokesperson of China’s Ministry of Foreign Affairs also announced the imposition of “reciprocal countermeasures” in response to the U.S. “Hong Kong Business Advisory,” which advised US people, foreign entities and financial institutions conducting business in the US not to engage in business transactions with persons subjected to US sanctions.

This US advisory targetted several officials of the Liaison Office of the Central People’s Government in the Hong Kong Special Administrative Region, with Chinese authorities retaliating by imposing sanctions on seven U.S. individuals and one entity.

The sanctions targetted individuals such as the chairman of the U.S.-China Economic and Security Review Commission, Carolyn Bartholomew, as well as the D.C.-based think tank Hong Kong Democratic Council but did not specify what specific penalties will be used

September 24, 2021
Foreign Direct Investment (FDI) in Cabo Verde in the first half of this year was...
Load more