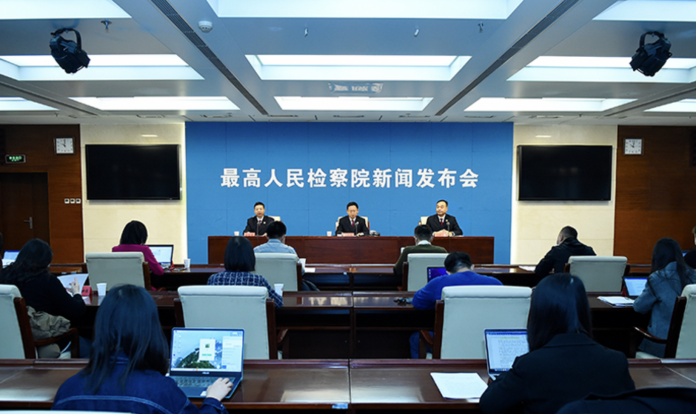 The Chinese Supreme People’s Procuratorate (SPP) emphasized today (Monday) that illegal gaming operations in the mainland with ‘out-of-borders’ elements were still highly prevalent and warned for the risks they posed to mainland China’s economy and social order.

The SPP is the country’s Prosecutor General’s Office, the highest national agency responsible for legal prosecution and investigation in the People’s Republic of China.

In a press conference held today to provide an overview of the current illegal gambling situation in the mainland, Miao Shengming, Director of the SPP’s First Prosecutor’s Office underlined that crimes of opening casino operations in the mainland involved more factors coming from outside the country’s borders when compared with other types of crimes.

Recent definitions of illegal gaming crimes by mainland authorities have included the notion of ‘outside border’ crimes, which would also include crimes in Macau and Hong Kong.

Miao cited data showing that from January to September this year, prosecutors across the country prosecuted 1,376 crimes concerning the setting up of casino operations – which could include online gambling operations – the second highest number of all kinds of ‘foreign related crimes’.

The SPP also emphasized that recent opening casino crimes are ‘highly deceptive and concealed’ since criminals use legislation aborad where gaming is legal as an ‘excuse to organize domestic citizens to go abroad for gambling’, or use online chess and card entertainment software and apps to trick citizens to participate in gambling activities.

‘Criminals also separate the whole process into parts and made them in charge by different personnel, dividing the process into software development, communication between casinos and gamblers, promotion, gambling activities and money settlement, bringing more difficulties for the judicial department,’ Miao added.

The high official added that opening casino crimes, especially online casinos, usually impact a large number of participants, adding that some gambling sites even have hundreds of thousands of registered members located in several provinces, causing major property losses to citizens, bankrupt of involved enterprises and the triggering of other crimes.

Meanwhile, such crimes will cause huge outflows of funds and generate other crimes such as internet fraud, extortion, illegal detention, illegal border crossing and endanger, causing severe impact on national economic security, social order and the safety of Chinese citizens and their asset.

The SPP also said that they will continue to strengthen researches on the laws and its application of the gambling crimes, with the focus of cracking down cross-border gambling crimes and internet related gambling crimes.

Also, they will work with relevant departments to strengthen border entry and exit management.

In order to crack down on such crimes in accordance with the law, the Criminal Law Amendment 11 that came into effect on March 1 this year amended Article 303 of the law, changing the maximum statutory penalty for the crime of opening casinos from the original three-year imprisonment to five years, with new regulations added for organizing participation in gambling outside borders.

The amendment deems that anyone who ‘organises’ mainland Chinese for the purpose of ‘overseas’ gambling will be deemed to have committed a criminal act.

Although analysts have considered that the changes target mainly gaming operations in the Philippines, Cambodia, Myanmar, Laos and Vietnam the wording of the new amendment’s establishes that cope of action to gambling “outside the country (borders)”, leaving the possibility for Macau gambling operations to be covered by it.

According to the Global Times, from 2020 to this October, Chinese public security organs had investigated more than 30,000 cross-border gambling cases, arrested more than 160,000 suspects, and shut down more than 5,100 gambling platforms and 3,900 illegal payment platforms and underground banks.

Today Secretary for Security Wong Sio Chak stated in the Legislative Assembly that the security forces under his office will closely monitor the evolution of gambling-related crimes, just one day after a large-scale police operation arrested 11 people, including Suncity CEO Alvin Chau, in Macau.

*With help from Therese Tu

August 16, 2022
The United States announced it had imposed corruption-related sanctions on several senior Liberian officials, including...

August 16, 2022
Rebels killed three people, including a soldier and a police officer, in Cameroon near a...