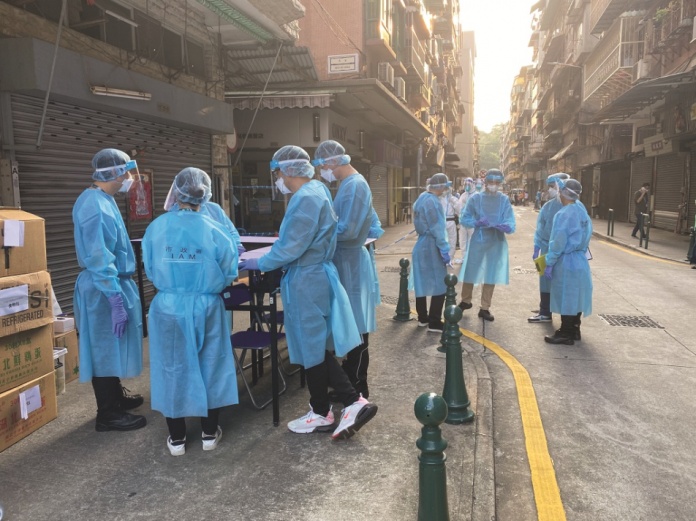 China’s ‘zero-COVID’ policy will hinder the recovery of Macau’s gaming sector in 2022 relative to others markets in the region that have accepted its endemic nature, rating agency Fitch Ratings indicated in its 2022 Outlook: Global Gaming report.

The country’s strict ‘zero-COVID’ policy – which applies to Macau and Hong Kong – entails locking down entire cities if a single case is detected, coupled with mass testing of entire cities and ever-changing severe travel restrictions.

Still, the credit agency noted that if travel resumes to normal with Mainland China and Hong Kong faster than its gradual recovery assumptions, Macau revenues should ‘outperform’.

Total gross gaming revenue totaled MOP72.1 billion between January and October, a 57 per cent increase from the same period last year but still distant from the MOP292.46 billion reported in 2019, pre-pandemic.

According to a recovery estimate comparing four Asia Pacific gaming markets, Macau’s gaming sector would have a lower rate of recovery than the best performer, Australia, and Singapore, and a similar growth rate with Malaysia.

After a tightening of cross-border restrictions following several local Covid-19 cases since September 25, recent weeks have seen an easing of such measures, with Zhuhai expanding the validity of nucleic acid tests from 48 hours to seven days also starting from November 23.

Macau’s visitation has held up since quarantine-free travel resumed with China, despite China’s COVID outbreak continuing, with the daily average between November 1 and 17 at 52,000, a number 20 per cent higher than the September average, and not far from the peak 57,000 in May.

Fitch Ratings also addressed the public gaming concession process set to be carried out by the Macau SAR government next year, predicting it will likely be a ‘pragmatic’ process, considering the level of investments made in the city by the current concessionaires.

‘Though additional volatility is expected ahead of the June 2022 expirations to extent government communication is sparse. The operators have contributed meaningful capital and social investment as part of their current concessions,’ the report noted.

All six concessions and sub-concessions are set to expire in June, 2022 with no indications provided by authorities so far on if the concessions will still be extended before that deadline.

Authorities have 180 days to provide a final report on the public consultation, with a draft bill to then be submitted to the AL for evaluation.

The new gaming law document proposes that given the current dimension the Macau SAR government will proceed with the study and revision of the number of gaming concessions to be attributed, with the current status of a sub-concessionaire to be prohibited but with no indication on how many concessions were to be maintained.

Although several analysts and industry members saw the proposed changes as an increased oversight, the rating agency considered that ‘unlike other industries seeing greater Chinese government regulation, such as tech and education, gaming concessionaires Macau have been heavily regulated for the past 20 years and its gaming environment already provides for meaningful social and financial oversight.

‘That said, the potential loss of a gaming concession would be a material credit negative to APAC subsidiaries and parent holdcos,’ the report warns.