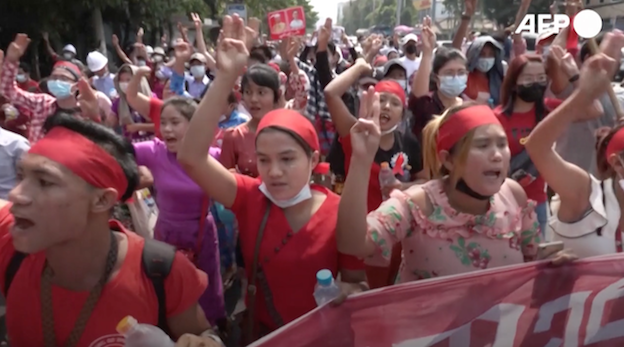 A Chinese envoy on Friday urged all parties in Myanmar to handle differences through dialogue and consultation.

“We hope that all parties in Myanmar will act in the fundamental and long-term interests of the country, properly handle differences through dialogue and consultation under the constitutional and legal framework, maintain political and social stability, peacefully solve problems that have occurred, and continue to promote the domestic democratic transformation process in an orderly manner,” Zhang Jun, China’s permanent representative to the United Nations, told an informal meeting of the UN General Assembly on the situation in Myanmar.

Under the current circumstances, all parties should maintain calm and restraint, refrain from intensifying tensions, escalating the situation and using violence, so as to prevent bloodshed, he said.

“China is engaging and communicating with relevant parties in Myanmar to further facilitate de-escalation of the situation and return to normalcy at an early date,” the ambassador added.

Speaking of the situation in this Southeast Asian country, Zhang said that what happened in Myanmar is, in essence, “Myanmar’s internal affairs.”

“The international community should, on the premise of respecting Myanmar’s sovereignty, political independence, territorial integrity and national unity, help relevant parties in Myanmar conduct dialogue and reconciliation in accordance with the wishes and interests of its people,” he said.

“The voice and measures taken by the international community should help the parties in Myanmar bridge their differences and solve problems, and avoid intensifying tensions and further complicating the situation,” said the envoy.

Zhang noted that Myanmar is a member in the family of the Association of Southeast Asian Nations (ASEAN). China supports ASEAN in playing an active role in easing the current state of affairs in Myanmar in the ASEAN way.

“China appreciates the mediation efforts of ASEAN countries. ASEAN countries are discussing the setting up of an informal special meeting of their foreign ministers, and we look forward to its early convening on the basis of consensus, thus providing a useful platform and opportunity for promoting problem solving,” the envoy said, adding that “we believe that ASEAN, as a mature regional organization, has enough political wisdom to help Myanmar tide over the difficulties.”

On the mediation efforts of the UN special envoy on Myanmar Christine Schraner Burgener, Zhang said that China “hopes that she will keep the communication channels with all parties in Myanmar open, make extensive engagements, and actively promote peace and talks.”

“The international community should create favorable conditions and leave necessary space for her work,” said the Chinese ambassador.

“The problem of Rakhine State in Myanmar, in essence, should be resolved by Myanmar and Bangladesh through bilateral dialogue and consultation. We do not hope to see new difficulties in solving this problem due to the domestic situation in Myanmar,” Zhang concluded.