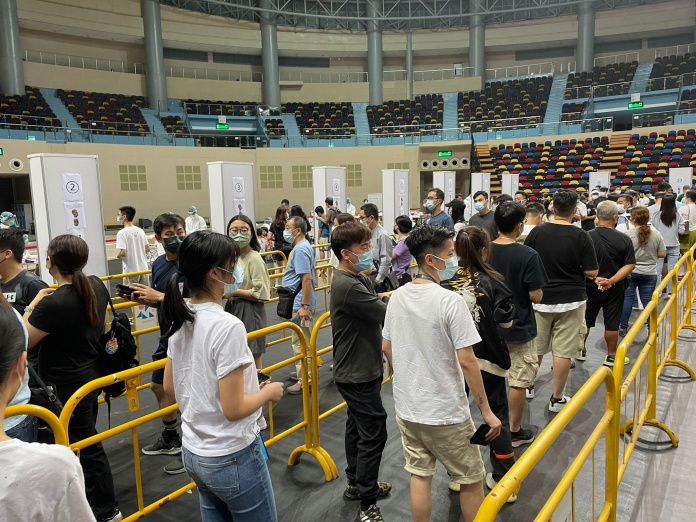 A three-day mass testing drive is underway across the city since 3pm.

Secretary for Social Affairs and Culture Elsie Ao Ieong U said that the arrangement for the citywide plan is being conducted according to the improved plan announced in August following the first round of mass testing.

The government is urging residents to not leave Macau while the city is facing an “extremely high” risk of community outbreak.

The whole population of Macau is asked to undergo the nucleic acid test (NAT) in the designated 52 testing stations set up across the SAR which will be operating round-the-clock until September 28, 3pm. These include 31 general NAT stations, seven caring stations and 14 self-paid units.

Those who hold certificate of a negative NAT carried out in the 24 hours prior to the beginning of the mass testing campaign (September 25, 3pm) are exempted from taking a new test.

The Novel Coronavirus Response and Coordination Centre asks citizens to book tests via https://eservice.ssm.gov.mo/allpeoplernatestbook  at the most suitable nucleic acid testing posts and show up at the posts on time to avoid waiting lines. It is not recommended to arrive too early, at most one hour. If people arrive after the scheduled time, a new appointment must be made. The elderly and disabled citizens cmay choose not to make an appointment and can go to the stations directly

The estimated waiting time at each NAT station can checked at https://eservice.ssm.gov.mo/aptmon/aptmon/en

The move comes after two new cases of COVID-19 were reported last night and early this morning, of security guards working at Golden Crown China Hotel. These cases are related to a previous one confirmed on Friday, of a 31-year-old male resident of Turkish nationality who tested positive for COVID-19 in a nucleic acid test carried out Thursday night and had arrived in Macau, via Singapore, from Turkey, on September 18th.

Meanwhile, several buildings on on Avenida Horta e Costa, Patane and Inner Harbour districts have been locked down by health workers.

The Macau SAR is under state of immediate prevention since 12am, Saturday (September 25).