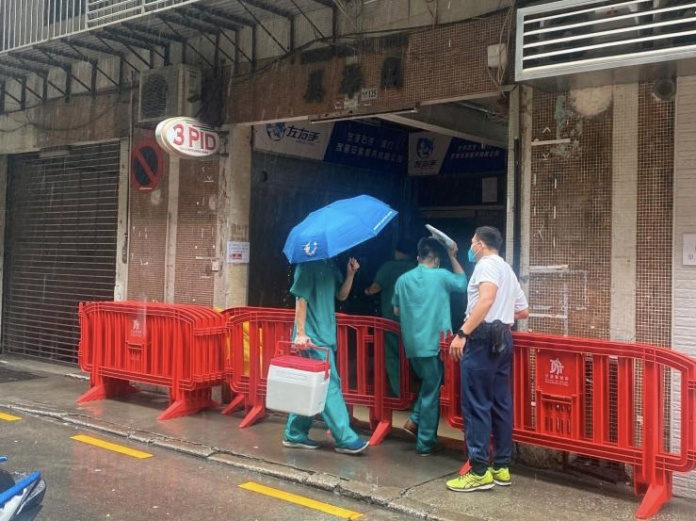 Health authorities today (Thursday) expressed that the current risk of community outbreak in Macau due to the recently detected cases in Zhuhai or involving a cargo ship crewmen is “low”.

Following the discovery that a crew member from a Hong Kong and Macau cargo ship had tested positive for Covid-19, new key testing areas were defined for anyone who lives, works or has stayed more than half an hour on or after 7 August in the areas from Inner Harbour to Praça de Ponte e Horta.

The first test must be done between 4:00 pm today and tomorrow, while the second one will need to be completed tomorrow (Friday).

From yesterday until today 4:00pm a total of 80,000 nucleic acid test samples had been collected, all coming back negative.

A total of 281 people linked to this case have also been placed under medical observation, including 22 close contacts and 126 secondary contacts, all of which have so far tested negative.

This recent case has been labelled by authorities as an imported confirmed Covid-19 case and not a local transmission.

Acting Director for the Health Bureau Health Promotion Division, Wong Weng Man, stated today that current regulations for ship crewmembers do not allow for them to leave the vessel and go to Hong Kong, with an investigation ongoing to assess inf the man in question infringed this regulation

“After becoming aware of this situation we communicated with our counterparts in Hong Kong to reinforce the enforcement of these measures. Such crewmembers upon docking cannot leave the pier and have contact with other people in Hong Kong. They must also use KN95 type masks,” Wong added.

Due to the new case passengers arriving in Macau by air or sea from parts of mainland China other than Zhuhai are now required to undergo a free nucleic acid test immediately upon arrival, on top of the requirement to present a 7-day valid NAT before boarding.

Yesterday the neighbouring city of Zhuhai also reported a new imported case involving a 21-year-old female non-resident worker who travels regularly between Zhuhai and Macau for work, the spouse of a previously reported imported case.

Both these cases were detected in centralised medical observation but as they worked and passed by the Gongbie Border area, prompted the setting up of key testing areas around this area.