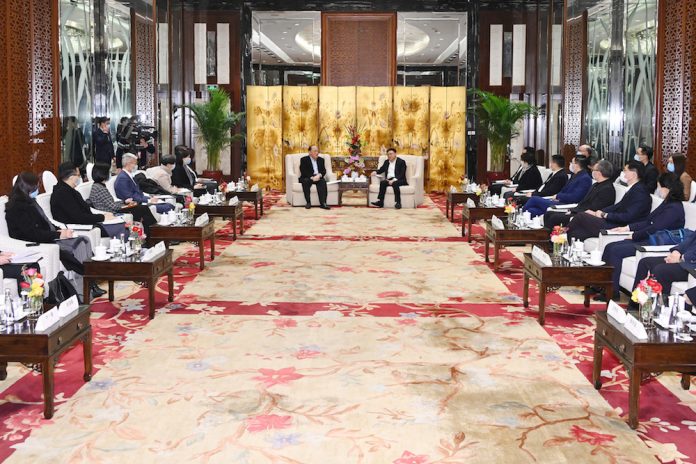 Macau’s government argued that cooperation between the former territory administered by Portugal and the Chinese city of Shenzhen should focus on exploiting Portuguese-language markets, particularly the development of China’s traditional medicine industry.

“In Shenzhen, there should be many companies looking to internationalise, and it should be possible to use Macau’s role as a platform to exploit the markets of Portuguese-language countries,” according to a statement issued on Monday evening on the last day of the visit by the head of the government, Ho Iat Seng, to the cities of the Greater Bay.

The Greater Bay is a Beijing project to create a world metropolis comprising Hong Kong, Macau and nine cities in Guangdong province, with some 70 million inhabitants and a GDP of around €1.2 billion, similar to the GDP of Australia, Indonesia and Mexico, countries that make up the G20.

Ho Iat Seng said in Shenzhen that Macau is committed to developing the traditional Chinese medicine industry and that in the future medicines can be registered in Macau and sold to the Greater Bay and gradually to other regions.

One of the stakes the Macau government has reiterated is the diversification of the economy, which is very dependent on the gambling market.

This is why the head of the government stressed the willingness to strengthen bilateral cooperation with Shenzhen in boosting the development of cultural tourism and creative industries.

During his visit to Guangdong province, which began on Friday, Ho Iat Seng had already advocated strengthening cooperation with cities in the Greater Bay to accelerate the growth of the financial, technological and health industries.

At a time when in addition to work to prevent the pandemic, the recovery of tourism is still being proactively promoted, Macau needs to accelerate the growth of the health industries, the modern financial sector, and technology, said a note from the authorities quoting the chief executive.

In addition to Ho Iat Seng, the Macau delegation included senior executive posts, such as the secretary for Economy and Finance, Lei Wai Nong, the head of the government leader’s office, Hoi Lai Fong, and the director of the Tourism Office, Helena de Senna Fernandes.