Researchers have found coronaviruses closely related to SARS-CoV-2, the virus responsible for the COVID-19 pandemic, in bats stored in laboratory freezers in Cambodia and Japan, according to a study published in the journal Nature on Monday.

The virus in Cambodia was discovered in two Shamel’s horseshoe bats stored in a freezer, which were captured in the north of the country in 2010. Meanwhile, a team in Japan found another closely related coronavirus in frozen bat droppings, the study showed.

“The viruses are the first known relatives of SARS-CoV-2 to be found outside China,” said the study, noting that the new findings support the World Health Organization’s search across Asia to investigate the animal origin of the COVID-19 pandemic.

But whether the new coronavirus SARS-CoV-2 passed directly from bats to people or through an intermediate host still remains unknown, according to the study.

“Both discoveries are exciting because they confirm that viruses closely related to SARS-CoV-2 are relatively common in Rhinolophus bats, and even in bats found outside China,” Alice Latinne, an evolutionary biologist at the Wildlife Conservation Society Vietnam in Hanoi, who has seen some of the Cambodian team’s analysis, was quoted as saying.

Aaron Irving, an infectious-diseases researcher at Zhejiang University in China’s Hangzhou, who also plans to test stored samples of bats and other mammals, said the findings suggest that other

“as-yet undiscovered SARS-CoV-2 relatives” could be stored in lab freezers, it added. 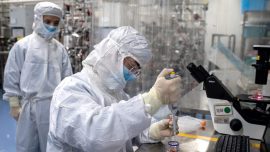