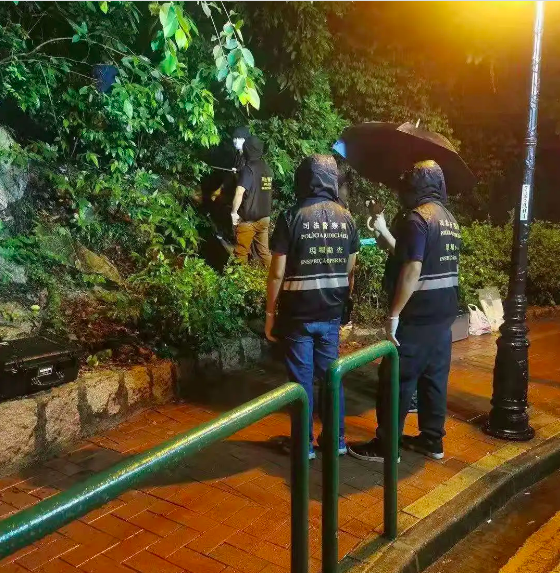 The suspect of a gruesome murder in Cotai has been detained in Zhongshan, the Judiciary Police (PJ) informed.

In the early hours of June 12, the department received a notice from the Public Security Police Force (CPSP) that a cleaning worker had found suspected human limbs during the cleaning of dead branches and leaves on the hillside near the Avenida Governador Nobre de Carvalho in Taipa, and dispatched personnel to investigate.

Based on the evidence obtained on the spot, PJ staff suspected that the case involved homicide and immediately initiated the on-site investigation procedure for serious cases.

With the assistance of the CPSP Police Canine Team more human limbs were found, plus a backpack with documents and blood-stained clothing in the same hillside.

‘The physical evidence was checked and combined with the forensic results, it was confirmed that the documents belonged to the victim in this case, and it was estimated that the time of death was about midnight,’ police determined.

Police authorities believe the perpetrator abandoned the body parts between the evening of June 11 to the early morning of the next day.

After a targeted large-scale search and investigation, surveillance footage showed that a man took a taxi to Taipa Central on the evening of June 11, got off and dragged what seemed to be a heavy suitcase to the spot where the human body was found, and then easily carried the luggage back to the car with him.

In the early morning of June 12, the suspect left the suitcase near a garbage collection station in the area and took a taxi to return to the hotel and change clothes, which he then threw away in a grass area not far from the hotel.

He left Macau via border gate on the afternoon of June 12.

The identity of the man involved and the victim, both mainland residents, was later confirmed, with authorities discovering that the man had rented a room in a hotel in Cotai and had contacted the victim in the same hotel on the afternoon of June 11, taking her to the room him.

After entering the victim never left the room again, with authorities discovering the suspect later went out to buy the suitcase and knives, which he brought back to the room.

The investigation also revealed that the room’s bathroom had contained large amounts of blood that was later cleaned, with DNA matching the victim’s.

Police authorities immediately requested the mainland police to make full arrests through the emergency regional police assistance mechanism and the Zhuhai Public Security Bureau arrested the 28-year-old suspect in the early hours of June 13 in Zhongshan.

After questioning the man admitted to committing the crime, revealing that he had stolen the victim’s money after the murder.

This is the first murder case to be reported in the SAR this year, after two cases were reported last year.

August 10, 2022
One year on from the Taliban's return to power in Afghanistan, some cracks are opening...

August 10, 2022
Two Afghan women, living in exile in Paris since the Taliban took back...
Load more