The European Union and other countries called Thursday for negotiations towards a legally-binding agreement to reduce plastic pollution, including the microplastics infesting oceans and waterways.

Ministers attending a conference in Geneva hosted by the UN Environment Programme, UNEP, were presented with a draft resolution stressing the urgent need to address the global crisis.

UNEP has warned that “our planet is drowning in plastic pollution”, with the world today producing some 300 million tonnes of plastic waste every year.

Since the 1950s, it has been estimated that some 8.3 billion tonnes of plastic have been produced, with around 60 percent of that tossed on landfills or into the natural environment.

Millions of tonnes of plastic end up in our oceans each year, with the debris causing the deaths of more than a million seabirds annually, and over 100,000 marine mammals, from otters to whales.

And the pandemic is expected to worsen the situation, with participants at the Geneva conference pointing to the dramatic increase in single-use face masks and gloves.

The draft text, presented Thursday by Peru and Rwanda and with the support of the European Union, its member states and seven other countries, called for the creation of an intergovernmental negotiating committee to draft an agreement.

The committee, the text said, should “develop an international legally binding agreement based on a comprehensive approach to prevent and reduce plastic pollution in the environment.”

This also includes microplastics, it said, referring to the tiny fragments that have been detected in every ocean on the planet and even at the bottom of the world’s deepest trench.

The aim should be “promoting a circular economy and addressing the full life-cycle of plastics from production, consumption and design to waste prevention, management and treatment,” the draft text said.

It meanwhile goes further than marine pollution, pointing out that “80 percent of plastics ending up in the seas come from land-based sources”.

The proposed resolution is due to be discussed during the United Nations Environment Assembly, which is due to be held in Nairobi from February 28 through March 2 next year. 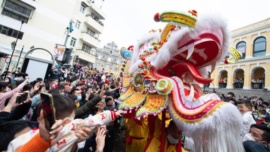 January 29, 2023
Driver Tharaa Ali takes her seat at the helm of a high-speed train ferrying pilgrims...

January 29, 2023
For much of the last century Belfast's dockyards dominated global shipbuilding but now the harbour...

January 29, 2023
Demonstrations in Lima turned fatal on Saturday as one protester died in clashes with police...
Load more