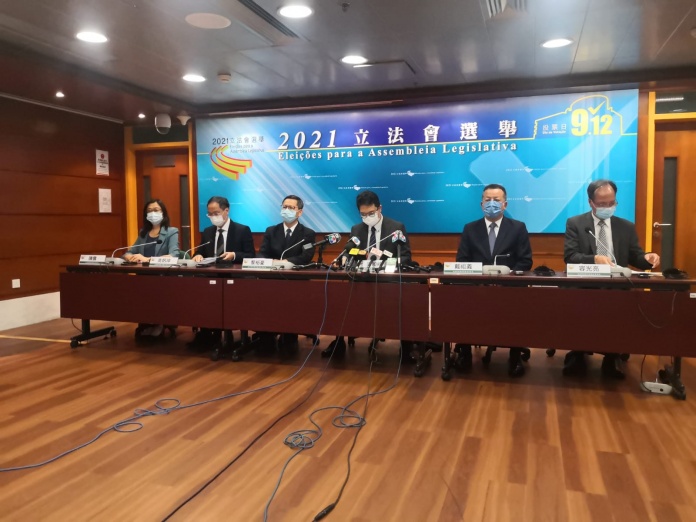 Public comments, including posts on social media, or actions deemed to go against the Communist Party of China (CPC) could have led to the disqualification of 2021 Legislative Assembly candidates, the Electoral Affairs Commission (CAEAL) indicated today (Monday).

Last Friday the commission announced in a special press conference that 21 candidates from six lists had been disqualified from the elections for disloyalty to the Macau SAR and its Basic Law.

The disqualified candidates were given until 6:00pm today to contest the decision, correct any procedural irregularities or suggest substitute the members on their candidate lists.

The commission will make a decision and reveal it on July 14 and the representatives of the respective candidacies contest it or appeal to the Court of Final Appeal.

In another special press conference held today, the Electoral Affairs Commission provided for the first time some clarifications on the requirements that led to the disqualifications, most of them said to be in accordance with the provisions of the Electoral Law demanding that “candidates must be patriots”.

“Residents enjoy the freedom of expression, it’s a fundamental right, but if you intend to take part in the elections all is asked is to follow the Basic Law and be faithful to the PRC,” Tong stated.

Candidates have to sign a pledge that they will uphold the Macau Basic Law however the President of the Electoral Affairs Commission for the AL Election, judge Tong Hio Fong, underlined that the CAEAL not only appreciated the statements subscribed by the participants but also assessed whether their actions and statements demonstrated that they upheld the Basic Law of the Macau Special Administrative Region of the People’s Republic of China.

“The PRC Constitution is the fundamental law of the State and is the basis for making the Basic Law, so the defense of the Basic Law necessarily implies the defense of the Constitution and the principles enshrined in it, namely the principle “One Country, Two Systems”, “Macau governed by its people”, “high degree of autonomy” and “the leadership of the Communist Party of China”, among others,” Tong noted.

“Thus, candidates must faithfully defend the Basic Law, the Constitution and the principles enshrined in it, therefore, they must be patriots”

The decision reached by the CAEAL took into consideration evidence provided by the Public Security Police Force (CPSP) requested by the commission, with candidates said to have been provided with a copy of the facts that led to their disqualification today.

Despite repeated requests of examples of actions or comments that were used as evidence for the disqualification, commission members considered that such information concerns personal information of the candidates and involves ongoing administrative or court procedures it was no appropriate to reveal it publically.

A total of 159 candidates fielded by 19 lists were confirmed by the commission, with 21 residents declared ineligible to stand in the September 12 direct elections after information was provided, upon request by the commission, by the Secretariat for Security.

The decisions had their main basis an interpretation of article 6 of the Electoral Law, which states that candidates are not eligible if there are ‘proven facts’ that they do not defend the SAR Basic Law or do not loyal to the Macau Special Administrative Region of the People’s Republic of China.

Considering that some of the candidates disqualified are incumbent legislators – legislator Sulu Sou Ka Hou who was elected in 2017 and legislator Ng Kuok Cheong who has served in the AL for about 30 years – the commission was inquired why these candidates were now classified as not being loyal towards the Macau SAR Basic law and the PRC’s constitution.

According to Tong, two elements post-2017 elections were crucial for the new criteria, the first being an amendment to the PRC’s Constitution approved by the National People’s Congress on March 11, 2018.

The amendment to the constitution stated that “the leadership of the CPC is the essence of socialism with Chinese characteristics”, and therefore the defence of the CPC leadership is a “very important foundation” for deciding whether the candidates are eligible for candidacy in this year’s election.

Another important element was the recent verdict by the Court of Final Appeal, namely its decision to reject an appeal by the Macau Union of Democratic Development to hold a public Tiananmen incident vigil on June 4, as it considered it offensive to the Chinese central government.

The commission also revealed seven criteria that together with evidence provided by the Public Security Police Force (CPSP) was used to evaluate their disqualification decisions.

These included if participants or candidates were found to have organised, participated in activities with the intention of overthrowing, destroy the fundamental regime established by the PRC Constitution or made statements relating to the aforementioned acts are not considered, under the terms of the law, as eligible.

Tong admitted that posts on social media by the candidates could have been considered as evidence.

This would include if participants or candidates were found to have participated in training aimed at going “against China or to disturb Macau, organized by anti-China organizations abroad”, including but not limited to receiving resources provided by such organizations, which would be deemed as collusion with foreign countries or foreign forces to ‘infiltrate the government bodies’ of the Macau SAR.

“This would have to be an organized activity that aims to attack or topple the constitutional order it is considered to not be loyal to the Basic Law,” Chan added.

Other requirements include the disqualification of candidates found to have committed acts against national unity and territorial integrity, pronounced secession declarations, or participated, in any capacity, in the activities related to the above-mentioned acts, or who have committed ‘acts in bad faith, of attacking, denigrating, slandering’ the PRC; NPC and Standing Committee decisions; or the Macau SAR.

Candidates found to have committed actions against the local national security law or to have provided effective assistance, collaboration or facilities that helped commit any of the before-mentioned acts would also be considered ineligible.

However, commission members underlined that just criticising the Macau SAR policies or performance was not considered as part of their evaluation, since this was considered as normal conduct for legislators.

“All citizens have freedom of expression and it is up to the legislator to critics government actions so we won’t make a decision considering such comments […] but we must assess if the candidate committed any act disloyal to the Macau SAR, or criticism of the CPC and its leadership, Tong noted.

When asked that if final, the decision to disqualified the candidates would also prevent them from taking part in future AL elections, commission member, Kou Peng Kuan, stated that each election would have a different commission to evaluate candidates but that facts that led to the disqualification of a certain candidate could be considered in future decisions.

The two-day period provided for candidates to contest or provide replacement list members was also justified on the tight schedule available for the 2021 AL elections.