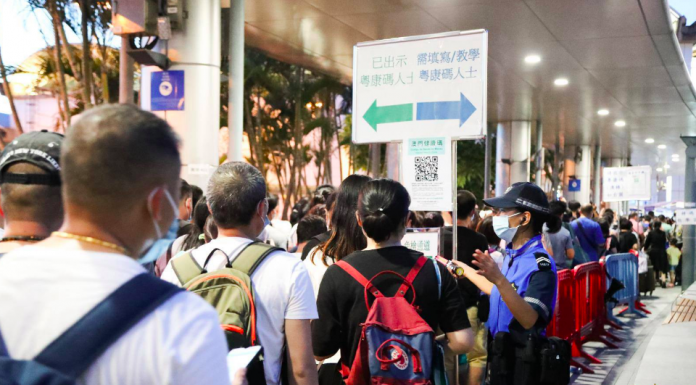 Tourism authorities believe that the current 24,000 daily Mainland China tourism entry average will remain until the end of the year but announced today (Wednesday) a campaign of large scale events aimed at increasing overnight visitation.

“We can see the numbers are increasing, it will take time. It will be a gradual recovery […] At the moment weekend visitation numbers are very similar to those on weekdays and we hope this series of events can attract more overnight visitors,” Macao Government Tourism Office (MGTO) Director Maria Helena de Senna Fernandes said today (Wednesday).

Visitor arrivals surged by 97.7 per cent month-to-month to 449,085 in September 2020 thanks to the resumption of exit endorsements for Mainland residents but the figure still represented a decline of 83.8 per cent year-on-year, with same-day visitors and overnight visitors at 289,474 and 159,611, respectively.

According to Fernandes, the Macau government has invested RMB3.45 million (MOP4.1 million/US$514,336) in consumer vouchers for mainland tourists, which were said to have driven more than RMB80 million in transactions.

The Macau Grand Prix and the Macau Food Festival will be the two main events in a series of large scale events included in a ‘Tour Macao Carnival’ initiative to be held throughout the city between November and December and aimed at attracting more mainland tourists for the Christmas, New Year and Chinese New Year holiday periods.

“Through a cooperation with Chinese channel CCTV-5, Chinese celebrities, KOLs and social media platforms we hope to inform tourists that Macau is a safe tourism destination,” Secretary for Social Affairs and Culture Elsie Ao Ieong U added.

According to the Secretary more than 100,000 job opportunities for the construction, retail, catering, advertising and manufacturing industries in a period of an economic slowdown.

The event will be held the Macau Tower between November 7 and December 6 is expected to attract more than 500,000 attendants.