An earthquake with a magnitude of 4.9 struck Cyprus on Thursday, sending residents fleeing onto the streets, but there were no immediate reports of any casualties or damage, authorities said.

The Cyprus Geological Survey said the quake struck at 4:27 pm (1427 GMT) near Dasaki Achna, about 18 kilometres (11 miles) northeast of the coastal city of Larnaca, at a depth of 55 kilometres.

The US Geological Survey and the European-Mediterranean Seismological Centre put its strength at magnitude 4.9.

The rare quake was felt “strongly” across the Mediterranean island, including the capital Nicosia, and even as far away as Lebanon, Syria and Turkey, the Cyprus Geological Survey said.

Witnesses said some residents in Nicosia and Larnaca scrambled out into the streets as a safety precaution soon after it struck.

The earthquake also forced the suspension of a parliamentary session to vote on a state budget, the Cyprus News Agency reported.

Police said there were no reports of any injuries or structural damage in the immediate aftermath of the quake.

Cyprus lies in a secondary earthquake-prone zone, but tremors of such magnitude are uncommon.

The biggest quake in recent years was a magnitude 6.8 in 1996 killing two people in Paphos along the west coast.

February 24, 2021
HSBC on Tuesday vowed to accelerate its Asia pivot despite spiralling tensions between China and... 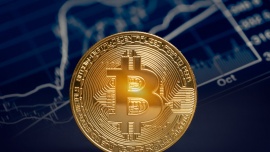 February 24, 2021
Bitcoin tumbled Tuesday from its record-breaking run after US Treasury Secretary Janet Yellen warned that...