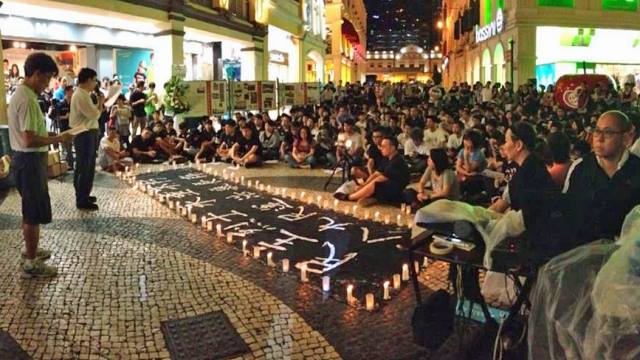 The Democratic Development Union will not present a notification to police authorities to hold a June 4 vigil in Senate Square this year, former legislator Au Kam San told the newspaper Ponto Final.

“Many friends felt worried and considered that it is better for the Macau Union for the Development of Democracy not to present the request to hold the vigil on June 4th”, Au added saying that, given the concern of the members, the group decided not to notify the police authorities for the vigil to be held.

Under the local gathering and protest law amended in 2018, demonstration organisers are requested to submit a notice to the Public Security Police Force (CPSP), a notice previously submitted to the Municipal Affairs Bureau (IAM).

The former deputy did not, however, indicate whether an online vigil will be organized from the Calçada de Santo Agostinho office, similar to what has happened in the last two years.

Between 1989 and 2019, the Democratic Development Union gathered at Senate Square on the night of June 4 in memory of the victims of Tiananmen.

In 2020, police authorities did not allow the initiative to be held for the first time in 30 years citing pandemic prevention concerns.

On the night of June 4, Macau authorities mounted an operation and ended up detaining two people, the daughters of Au Kam San, with agents seizing two candles and a book about Tiananmen.

The Public Prosecutions Office (MP) later filed the case against Cherry and Christy Au for illegal assembly, with any charges later dropped.

Then in 2021, the Court of Final Appeal struck down an appeal by the group after another police refusal citing that the vigil was a “planned and deliberate attack and insult” to the People’s Republic of China.

Following the court decision, a statement was issued by the Macau government indicating that it “respects and backs” the TUI decision and asking for members of the public should recognise that such activity is “illegal and endangers national security”.

Last year the Electoral Affairs Committee for the Legislative Assembly also used previous participation in June 4 vigils as a reason to disqualify several candidates from the elections.

The decision was then backed by the Court of Final Appeal which rejected the arguments put forth by six of the 20 candidates – including incumbent legislators Sulu Sou Ka Hou and Ng Kuok Cheong – that had been disqualified, stating they had participated in anti-China and anti-SAR activities.

May 23, 2022
A secretive deal between the Vatican and Beijing is up for renewal later this year...
Load more