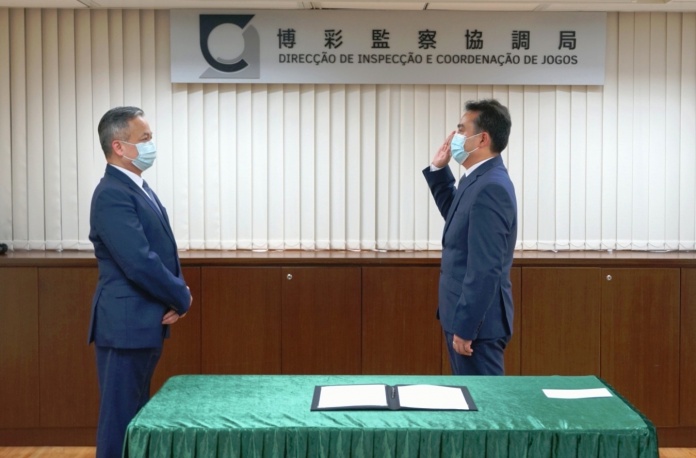 ‘Lio Chi Chong, served as a criminal investigator in the area of ​​the security forces, and in the legal area of ​​personal data protection. He also performed work related to monitoring and applied technologies in the field of gaming, having professional skills, experience and literary skills to exercise the functions of a director in the DICJ,’ Ho was cited as saying in a sworn-in ceremony held today and not open to the media.

Lio was sworn-in as the new DICJ Deputy Director today (Monday) for a one year term, after at the beginning of the year, former Deputy Director Leong Man Ion suddenly ceased his functions from January 7 of this year by his own request, and returned to his previous position as a DICJ senior technical advisor.

From 1999 to 2008 Lio worked as a Judiciary Police criminal investigator, having later worked in different legal and public relations areas of the Office for the Development of the Energy Sector (GDSE) and the Office for Personal Data Protection (GPDP)

He was working as DICJ legal senior technician since August, 2020 until his new appointment.

Adriano Ho – who was sworn in as head of the gaming watchdog in June, 2020 – previously served as head of PJ’s gaming-related and economic crimes investigation unit from 2012 to 2014.

According to the Macau SAR 2021 policy address, the next two years will also see authorities update and specify the requirements for high amount transaction reports set to prevent money laundering transactions, and evaluate enhanced due diligence measures enforced by gaming operators for online client transactions.

The 2021 policy document also indicates that authorities plan to start an audit to local junket operators between the first to last quarter of 2021, including to the oversight and supervision mechanisms enforced by junkets over their clients’ accounts.

Inspections on the operational procedures carried enforced by junkets on their accounts in local casinos will also be carried out in the same period.

In 2020 authorities already collected background information on licenses junket operators to be used for evaluating the suitability of new licensees, including requirements for share transfers and company board appointments.