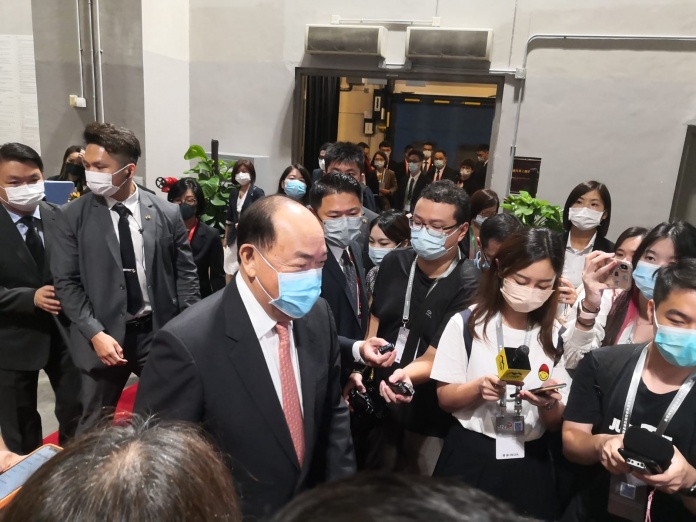 Chief Executive Ho Iat Seng expressed today (Thursday) that the candidate disqualified before the 2021 Legislative Assembly elections had nothing to do with criticisms towards the Macau SAR government, and that residents had the right to criticise local authorities.

“It is okay to criticize the Government. The Government is available to accept criticism. I was in the AL for 10 years, and many legislators scolded the Government, criticized it and I always accepted it, I never stopped allowing it. When the government doesn’t do the proper work, it accepts the criticisms. It is not for criticizing the Government that we do not let them participate in the elections,” Ho commented today after the 12th International Infrastructure Investment and Construction Forum (IIICF) opening ceremony.

The Macau Electoral Affairs Commission last week confirmed the disqualification of 20 candidates running for direct election from six different electoral lists for disloyalty towards the Macau SAR, its Basic Law and the country’s constitutions.

The EAC yesterday rejected the objection raised by three groups of candidates ruled ineligible to participate in the election, with the groups having until today to formally appeal the decision to the Court of Final Appeal.

Ho stated today that he “respected” the decision of the electoral commission and underlined that the criteria used by the EAC to make the decision took into consideration the 2018 amendment to the country’s constitution.

To support its decision the EAC previously revealed, for the first time, seven guidelines it used to assess if candidates truly uphold the Constitution and the Basic Law, including requirements such as not colluding with foreign countries or foreign forces, or having attacked or smeared the party’s leadership and constitutional order.

The commission indicated that the criteria were defined taking into account a 2018 amendment to the country’s constitution, which added to an article stipulating that ‘the socialist system is the basic system of the People’s Republic of China’ that the ‘defining feature of socialism with Chinese characteristics is the leadership of the Communist Party of China’.

The CE cited these changes to justify why incumbent candidates such as legislators Sulu Sou Ka Hou and Ng Kuok Cheong, the former elected in 2017 and the latter a legislator since 1992, could have now been categorised as not upholding the Macau SAR Basic Law and disqualified from running in the September 12 elections.

“The EAC took into consideration the 2018 amendment and the principle that Macau should be governed by people who love Macau and the country. We will reinforce this kind of supervision,” Ho added.

Ho underlined that “there was no contradiction” in the fact that the two legislators could have been allowed to run in the 2017 elections but the ones this year, stating that each AL election has a different process.

The head of government also underlined that the current circumstances were different from when the current Electoral Law was enforced in 2016 and that local authorities have to constantly adapt to new circumstances.

The EAC has indicated previously, without providing specifics, that there are sufficient facts that prove the relevant candidates had committed actions that do not uphold the Basic Law or bear allegiance to the Macau SAR.

Such evidence was provided by police authorities to the EAC, and according to the candidates targetted it includes photos with Hong Kong pro-democracy politicians; involvement with the June 4 vigil; and public statements in support for electoral reforms towards universal suffrage in the Chief Executive elections.

In September 2019, after being elected, Ho Iat Seng reiterated the possibility of instituting universal suffrage for the election of the leader of the Government – which is allowed under the SAR Basic Law – during his administration but without a timeline being set.

Then during his 2021 policy address question and answer sessions at the AL Ho indicated that he is in favour of further democratic election political reforms but that he did not consider this to be the right time to put forward plans to advance in this direction.

“I’ve expressed that the general tendency was towards universal suffrage but that it wasn’t something you could do right away. I hope the media can hear carefully what I said and not interpret my words out of context,” Ho stressed.

As for the recent verdict by the Court of Final Appeal, namely its decision to reject an appeal by the Macau Union of Democratic Development to hold a public Tiananmen incident vigil on June 4, the CE only stated that authorities “respected the decision by the court”.

The decision was cited by the EAC as one of the factors taking into consideration while evaluating the eligibility of the election candidates.