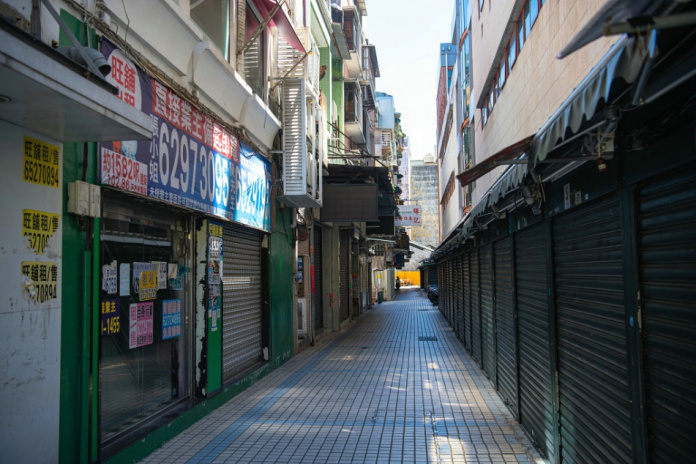 As a result of the huge impact brought by the local pandemic outbreak and ensuing restrictions, the economic performance of Macau in June and July 2022 was “extremely gloomy”, a study by the Macau Economic Association indicates.

However, the think tank notes that to ensure a quarantine-free customs arrangement with the mainland, the SAR will need to continue to adhere to the “dynamic zero-COVID”.

According to the calculation of various economic data published so far, the economic prosperity index of Macau in June and July remained at “downturn” levels of 1.7 and 1.5 pointsrespectively, reflecting that the pandemic outbreak continued for over one month,has caused a significant impact on the local economy, which is already “hitting a slump”, the association said in the economic prosperity index report.

“The pandemic prevention measures and restrictions have seriously dragged down economic recovery, and most indicators show that the local economy has fallen into a slump,” the study stressed.

The report emphasizedthat the unemployment rate of local residents rose to 4.8 per centin June, making a new record high in the past ten years, while the gross gaming revenue of July dropped by 95.3 per centyear-on-year to only MOP398 million (US$49.3 million), the lowest since records began in 2009.

Enterprises experienced tremendous operating pressure in this pandemic outbreak, with some of them forced to cease operations while employees were put on unpaid leave, resulting in a sharp drop in income, the study noted.

The SAR experienced a 12-day partial lockdown ordered by the Chief Executive to control the spread of the coronavirus from July 11th to July 22rd, during which all commercial and industrial business activities in the city were suspended except for those that maintained the normal operation of society.

During the following consolidation period and stabilization period from July 23 to August 7, the SAR government has gradually lifted the restrictions on business operations, and the city has now entered a “normalized pandemic prevention stage” with regular nucleic acid testing required for citizens listed in the key work group or those who live in the key areas.

However, the report indicated that although the pandemic situation is stabilizednow, future economic recovery will still have to depend on changes ofthe pandemic and the prevention and control policies.

“Macau still needs to adopt the regular nucleic acid testing approach to ensure the goal of “dynamic zero-COVID”, so as to maintain normal local economic activities and a quarantine-free customs entry policy with the mainland,” the association suggested.

The “dynamic zero-COVID policy” refers to the strategy that citizens are subject to frequent nucleic acid tests regardless of their likelihood of contracting the virus, with quarantine management conducted for those who are tested positive and their close contacts, instead of ordering a large-scale lockdown for all citizens.

Meanwhile, the association expressed that repeated pandemic outbreaks around the world, global high inflationand tightening monetary policy have affected the recovery of the local economy.

As the United States has significantly raised interest rates, it is estimated that Macau and Hong Kong banks will raise the prime rate in September, and such actions will not only increase the pressure on local residents’ mortgage repayment, but also increase the burden of business operations as the borrowing cost will rise, the association noted.

The United States Federal Reserve (Fed) decided at the end of July to raise the target range for the federal funds rate by 75 basis points to 2.25 to 2.5 per cent, marking the most stringent consecutive action since the Fed began using the overnight funds rate as the primary tool of monetary policy in the early 1990s.

According to the estimations drawn by the report, the SAR’s economic prosperity index in the next three months will still hover at a “downturn” level of around 1.8 to 1.9 points.