Coastal cities are on the “frontline” of the climate crisis, with swelling oceans redrawing the map and putting hundreds of millions at risk. That’s one of the warnings of an unpublished draft report by the UN’s climate science advisory panel, seen exclusively by AFP, the most extensive compendium to date of the urgent climate threats facing the planet. Among the cities featured in the report is Florianopolis, in Brazil. Here, communities living along the coast in homes facing the sea and vulnerable populations in favelas have been faced with the consequences of extreme weather events. Researchers and local authorities say they have seen a concerning increase of these events in the last decade, endangering the Brazilian city-island’s future. Across the country, millions of people living in low-lying cities like Florianopolis are also at risk of devastating floods.

US to take in thousands more Afghan refugees

Poland steps up security at vaccination centres after attacks

August 2, 2021
Climate activists briefly blocked the entrances to the UBS and Credit Suisse headquarters in Zurich...

August 2, 2021
Kyrgyzstan's first post-independence leader has been brought back to the country from exile to face...

August 2, 2021
After over a year of travel restrictions, the arrival of American Airlines flight LY8051 to... 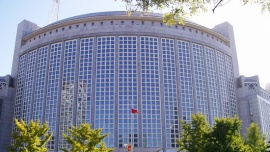 US to take in thousands more Afghan refugees