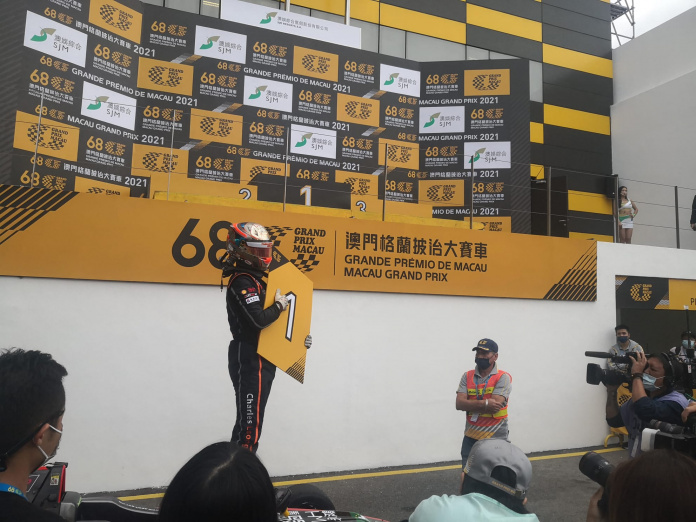 This year saw a repeat of the 1-2 podium for the home side in the SJM Formula 4 Macau Grand Prix, with Leong – racing for renowned local team Theodore Racing – and fellow Macau driver Andy Chang keeping the prize in the SAR.

“It definitely feels amazing it’s something really special for somebody born and raised in Macau. It’s just special, I don’t know how to describe it,” an emotional Leong stated after the race.

“It looks pretty easy from the outside but you still need to maintain the car away from the wall. It’s still hard because it doesn’t mean you are not taking risks, you are breaking lighter and making things a bit differently and not pushing so hard but still managing it. I’m worried there could be a safety car. If I keep pushing my tires would wear out and maybe I could be overtaken. In the end, it didn’t happen.”

Meanwhile, 25-year old Andy Chang had a more eventful race, receiving a drive-through penalty that dropped him to third. Still, he fought back to second, achieving the Macau F4 Grand Prix’s record fastest lap time in the process.

“It was a tough race, I drove terribly in the beginning, did some 2 minutes 31, and finished low. In the second corner of Lisboa, I tried to break later to overcome since it was my only chance to overtake Charles but it didn’t work. Five laps later I received a penalty, don’t know why […] I’m still happy to finish second,” Chang added.

Concerning his plans for next year, Leong stated he would focus on finishing his Sports Science online bachelor’s degree, lamenting how difficult it is to keep any competition rhythm under the current pandemic environment.

Prior to the 2021 Macau Grand Prix, Leong won all four races at the first round of the Chinese Formula 4 Championship at Zhuhai International Circuit., but spent almost a year without seating on a race car.

“Now racing is a little bit more complicated, I didn’t even have a chance to go to the car for at least 10 months before driving in the Zhuhai circuit. The last time I was in the car before that was last year’s Macau Grand Prix. I think I have proven something,” he underlined.

“I’m looking forward to actually helping to develop the racing culture in Macau. We have such amazing resources, the Macau Grand Prix and Go-Kart race track, but we need to have people that actually know what a racing career is. I and Andy could fill that place, we’ve been to Europe with the big teams and good drivers, we know how it works”.