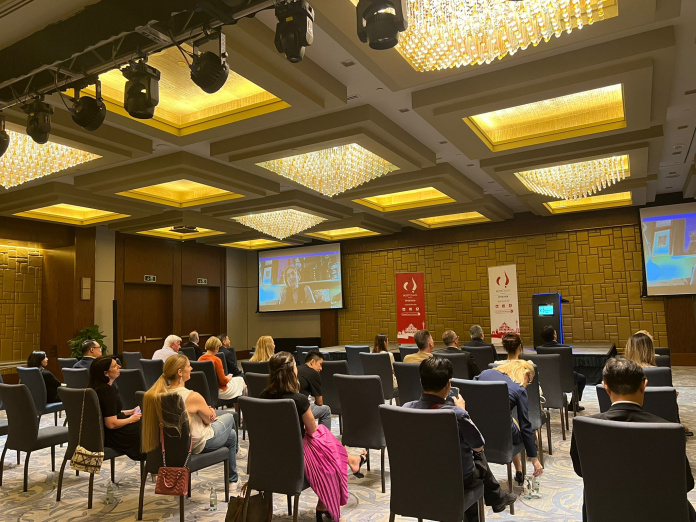 Restaurateurs need to have a deep understanding of the local market and avoid replicating the same model in different regions, Michelle Garnaut, founder of one of the most successful western restaurants in the greater China area indicated today (Wednesday).

The remarks were made by Michelle Garnaut, founder and Chief Executive Officer of the M Restaurant Group during the latest session of the Power Hour talk series held by the Australian Chamber of Commerce in Macau (AustCham Macau) via video link to talk about “Journey into & running HK & China’s most successful western restaurants”.

Ms. Garnaut opened M at the Fringe in Hong Kong in 1989, becoming a household name. Ten years later, she expanded her presence on the Chinese mainland by opening M-branded restaurants in Shanghai’s historic waterfront and then in Beijing’s Tiananmen Square in 2009.

At the video talk today, Ms. Garnaut expressed that a more local understanding of a city’s market is important for running catering businesses, and shared her own experiences of opening several successful restaurants in mainland China and Hong Kong.

“You have to know your market in the city…and you can’t just duplicate things. The location isn’t just a building, it’s a whole package of what it looks like, what’s around it, and where you can do things, there are so many considerations to take,” she said.

“I knew the Hong Kong market because I had already worked here for 5 years in the F&B industry there… And I first visited Shanghai in 1985 and I went there every year, I learned that there is a big enough market and people there were really looking for some western and international styles of dining,” Ms. Garnaut noted when sharing her own experiences, “and when we first opened up in Beijing, there was so much glamour, people behaved differently, there were so many well-dressed people spending a lot of money.”

Meanwhile, the catering business operator stressed that it’s more difficult to attract Cantonese customers, as they prefer to choose the food they are familiar with.

“Cantonese people are much more’married to’ their Cantonese cuisine, and it’s much harder to bring western food into Guangzhou than into Shanghai,” she stated.

Also, Ms. Garnaut pointed out that the gradual opening up of China has increased the willingness of Chinese people to try international cuisines, as in recent years, 90 per cent of her restaurant’s customers are Chinese, compared to 20 per cent when they first opened.

The F&B business owner also indicated that restaurants can have special meaning for people as they are not only a location to eat but also a place to store memories.

“Restaurants are not just profit centres or brand names, restaurants are places where people like to go. What we have from those restaurants are mostly memories, like the babies’ christenings or the wedding proposals…there are so many emotional moments. “