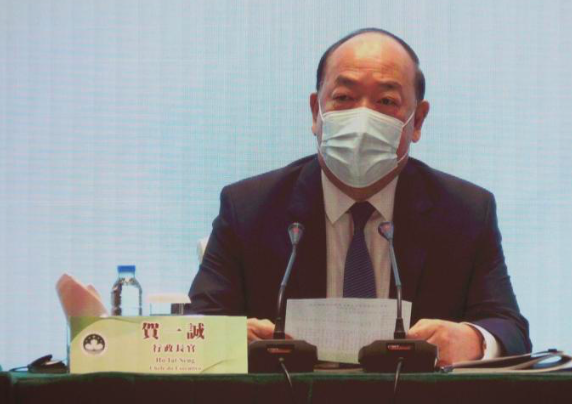 The first half of Ho Iat Seng’s first five year term has been marred by a heavy-handed pandemic response and the lack of a clear focus on how to effectively carry out the SAR’s economic diversification, analyst consulted by Macau News Agency expressed.

It was December, 2019 when Ho Iat Seng was sworn in as the Macau SAR the fifth-term Chief Executive, the third person after Edmund Ho and Francisco Chui Sai On to be entrusted with the top administrative position in the city since the city’s handover to Chinese administration.

Coming after a Chui administration that mainly focused on expanding social support benefits and consolidating the city’s gaming and tourism sector expansion, Ho touted his business credentials as something that would help him propel a much awaited economic diversification.

An overhaul of the public administration system and solutions to the perennial housing woes of residents were some of Ho’s campaign promises, however his tenure would soon be shaken and dominated by a once in a lifetime events, as the Covid-19 pandemic shook the world.

Isolated from the world and even mainland China as stringent pandemic prevention policies brought travel to a halt, the SAR most of the last two years with record-low visitor and gaming numbers and record high unemployment levels.

While attempting to cut back public spending the Ho administration also dipped to the city’s abundant financial reserves for repeated rounds of financial stimulus in an attempt to reduce the opandmeic impact in the livelihood of a populace accustomed to economic abundance.

With half of Ho’s first five-year term already in the rearview mirror, MNA consulted several public affairs experts and commentators to review the bumpy ride that was the 2020-2022 period for the Macau head of government.

When it rains it pours

Veteran political commentator and observer of the politics of Hong Kong and Macau, Sonny Lo Shiu Hing, highlighted that Ho Iat Seng spent most of his first 30 months of government with his “hands tied” by the need to respond to the Covid-19 outbreak.

“His subordinates adopted an appropriate measure to close down casinos at the beginning of Covid outbreak in 2020 but then they tended to be overcautious in the summer of 2022 — an oscillation that preferred to err from the safest side but the costs were tremendous economic stagnation and loss of jobs,” Lo told MNA.

Macau’s gross domestic product (GDP) grew by 18 per cent year-on-year in real terms in 2021, after contracting by 54 per cent in 2020, according to figures from Statistics and Census Service (DSEC).

However, following prolonged outbreaks in mainland China and the city’s worst outbreak and lockdown in July, the local economy contracted by 9 per cent in the first quarter of 2022 and then by 39 per cent in the second quarter.

“I would give him 50 marks out of 100 — a mixed reaction to the Covid development. Ideally he and his team should be more relaxed in the summer of 2022 as the world was more relaxed but he and his subordinates were too cautious and looked to the mainland approach to dealing with Omicron,” Lo added.

Ieong Meng U, an assistant professor at the Department of Government and Public Administration at the University of Macau, pointed out that when the pandemic first broke out in the early 2020, the Macau government ensured a sufficient supply of face masks and avoided large scale community infection, in a rapid response by the Ho administration worthy of priase when compared with Hong Kong or other countries.

“However, after two years, we cannot use the same baseline in performance evaluation when people’s life in most of the countries had already returned to normal life. Macau’s economy was ruined and the necessity for an open border with the Mainland China is not enough to justify the policies the government advanced with in the recent semi-lockdown in June and July,” the professor posited.

“For example, the experience in Shanghai had already informed us that frequent universal nucleic acid testing can’t stop community infections, so why Macau had to waste huge time and money? […] Clearly, I think the majority Macau people would not give a good score for Ho and his team for his fail to provide a vision for Macau’s economy and its blunt intervention in daily life”

A similar view was provided by Eilo Wing-yat Yu, an Associate Professor in the Department of Government and Public Administration at the same university.

For the public administration researcher the pandemic was a considerable challenge but also an opportunity for Ho to build up his legitimacy in a short period of time, partly due to his good relationships with the mainland authorities for their cooperation halting the spreading of COVID-19 in the local community.

“However, his relationships with the mainland is a double-edge sword. He has been placing close attention to the relationship with mainland and local autonomy/flexibility of the MSAR become the cost,” he added.

“Not only does the MSAR lose its autonomy in shaping the anti-COVID-19 policy but the MSAR could not has much say on other issues, such as gaming laws and licenses, disqualification of legislative elections candidates, national secruity, the delevopment of Hangqin, the operation of public sectors (e.g. the New Taipa hospital) etc.

For Yu in the first half of his term, Ho’s government exposed the MSAR authorities as “executive arms of the mainland” over its local issues and to an extent, widened the gap between the authorities and Macau residents as decision makers not responsive to the local community.

“Indeed, Ho’s pro-mainland approach is much obviously, in comparing with his predecessors. When the MSAR continues the anti-pandemic COVID-19 policy, but does not understand as endemic disease, the government-mass gap may probably further widened and will lead to governance problem, if not crisis, in second half of Ho’s team,” Yu pointed out.

As for Ho’s diversification goals analysts still project a long and winding road to an economy that is effectively free from its dependence on the gaming sector, an area repeatedly hit in the last years not just by the pandemic but by the almost obloitertaion of the VIP junket business.

In his latest policy address in June of this year, Ho said that in the second half of this year the government will lower its previous 2022 GGR forecast of MOP130 billion, with further budget adjustments needed.

At the same time Ho has repeatedly used the pandemic crisis as an example of the dangers posed by the reliance on a single business sector, while pointing to the Hengqin cooperation zone as a catalyst for the development of the city’s finance, high-tech and TCM sectors.

Last year, central authorities unveiled the Guangdong-Macau In-Depth Cooperation Zone in Hengqin, a new mechanism approved by the central for Guangdong and Macau to help facilitate the economic diversification and development of Macau.

Still a recent research paper warned that the economic development of the Greater Bay Area in the second half of the year will still face the challenges brought by the COVID-19 pandemic and record-high global inflation, while suggesting for Macau and Hong Kong for prepare for re-industrialization as the number of tourists plummets.

Meanwhile, Sonny Lo stated to MNA that the real challenge for Ho’s executive is in diversifying the economy is the limited skill set provided by local professionals from years of a protecionist approach to employment and specialising in a limited set of job positions.

“Locals should be offered more subsidies to undergo adult and professional and on-the-job training as the skills set of many Macau people are outdated and they need to be trained to learn the new skills conducive to the change of economy toward more diversification away from just gambling and gaming industry,” he added.

Total gross gaming revenue for the first eight months of the year stands at MOP28.8 billion (US3.58 billion), 53.4 per cent less than a year ago and just 14.5 per cent of pre-COVID January-to-August 2019.

As of the end of the second quarter of this year, the number of full-time employees in the gaming industry stood at 53,592, a decrease of 3.9 per cent year-on-year, with the average income also declining by 1.8 per cent, DSEC data showed.

It is under an unpredente negative economic downturn that the third CE since 1999 will now face the remaining of his first term, kickstarted already by a crucial public tender to award new six gaming concessions.

By the end of the year the Government will present a law proposal for new middle class ‘sandwich’ public housing, with streamlining of several public departments ongoing.