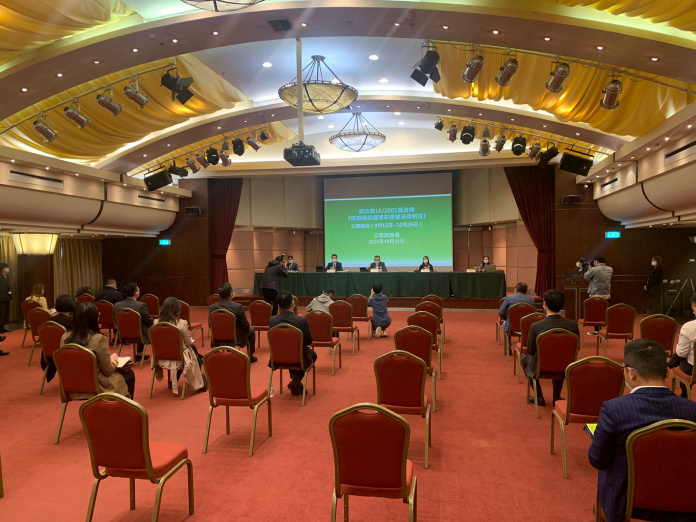 The first face-to-face consultation session opening for the general public about the revision to the city’s gaming law was wrapped up in less than 40 minutes today (Friday), as representatives from the government repeatedly encouraged participants to voice their opinions.

In the meeting that was supposed to last for two hours and a half, a total of five persons shared their insights, welcoming the changes proposed by the authorities and asking for more social responsibilities from gaming operators.

Slightly more than half of the 80 seats were occupied in the afternoon consultation session today, with the presence of representatives from at least three of the city’s six gaming operators, according to the on-site observations by MNA. But none of the gaming representatives shared their opinions in the meeting.

The government is running a 45-day public consultation exercise about the proposed amendments to the gaming law until 29 October.

The face-to-face consultation session, exclusively reserved for the representatives of the gaming industry, was held on 20 September, but the subsequent sessions for the general public have been delayed until now due to several local Covid-19 cases found across the city between late September and early October.

Sariputra Tong Ho Laam, a director at the Youth Association of People linked to the prominent local Fujian community, said in the afternoon meeting today that gaming operators could shoulder more social responsibilities in the upcoming years.

“The gaming industry is the major economic pillar of Macau. In the long term, [the operators] should take up more social responsibilities for the diversification of Macau… and transforming Macau into an international hub,” she remarked.

She suggested the operators could invest and establish three public funds for the development of leisure and entertaining offerings across the city; for the projects that could accelerate the smart city development of Macau; and for the support of the local start-ups and young entrepreneurs.

U Sio Chao, secretary-general of the Macau Association of Young Employees in the Gaming Industry, revealed today that 90 per cent of the respondents polled in an internal survey among the members of the association hoped the authorities could have some regulations about the management-level executives at gaming operators in the future, but he did not divulge further in details what should be done.

He told the consultation session today that the members of the association also supported more social responsibilities for the gaming operators, namely pledging local employment safeguards, promotion for local employees, and providing assistance for the local small-and-medium-sized enterprises.

The secretary-general added he agrees with the government’s proposal of introducing government delegates to gaming operators for better supervision.

The Macau Association of Young Employees in the Gaming Industry is headed by Thomas Li Chu Kwan, who just resigned from his long-serving position of chief executive at the Macau Jockey Club in August.

Senior executives of the city’s six gaming operators also serve as honorary chairpersons of the association, including Wilfred Wong Ying Wai from Sands China, Angela Leong On Kei from SJM Holdings, and Linda Chen from Wynn Macau, according to the website of the group.

Initially, only three people talked in the first 25 minutes of the afternoon session today, including a 15-minute introduction of the consultation document about the gaming law revision by the representatives of the Gaming Inspection and Coordination Bureau (DICJ).

After the government representatives in the session like Lio Chi Chong, deputy director of DICJ, had encouraged the participants to voice their opinions several times, two more persons came forward asking about the timetable and the process of gaming law revision following the end of the consultation.

However, Mr. Lio responded the authorities would not comment on anything besides the content stipulated in the consultation document.

Seven more face-to-face consultation concessions for the general public will take place from tonight until next Monday.