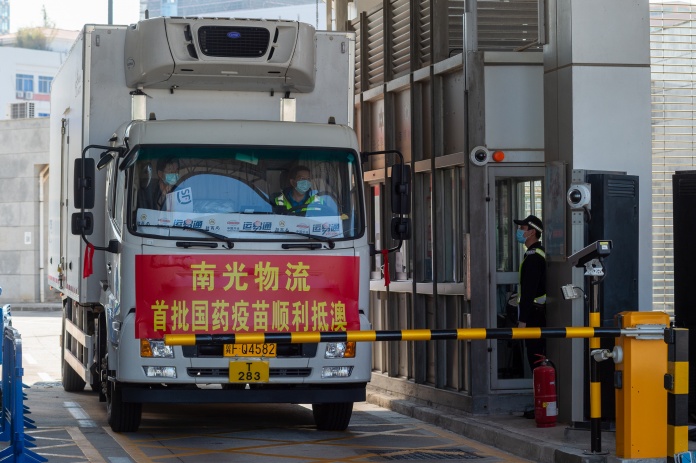 The vaccine batch arrived via the Zhuhai-Macau Cross-Border Industrial Zone with a ceremony held at 2:30pm.

This batch of vaccines was transported overland from Beijing to Macau for more than 30 hours, a process that had the full cooperation of the Central Government Liaison Office and the Nam Kwong Company Limited Group in addition to other relevant services, according to a statement from the Government Information Bureau.

A second 100,000 batch of BioNTech vaccines purchased from Fosun Pharma is set to arrive in the second half of the month, with Oxford-AstraZeneca vaccines expected as soon as the third quarter of this year.

Vaccination of frontline workers is expected to start on February 9, just before the start of the Chinese New Year period.

Local authorities have indicated that vaccination will be free of charge for residents and for non-resident workers and students, with authorities to provide a MOP500 covering the cost of two vaccine shots.

The 48th local confirmed case has been reported yesterday, a 30-year old local resident of Portuguese nationality, part of a recent group of residents who returned to the city on a special flight from Tokyo on January 21.