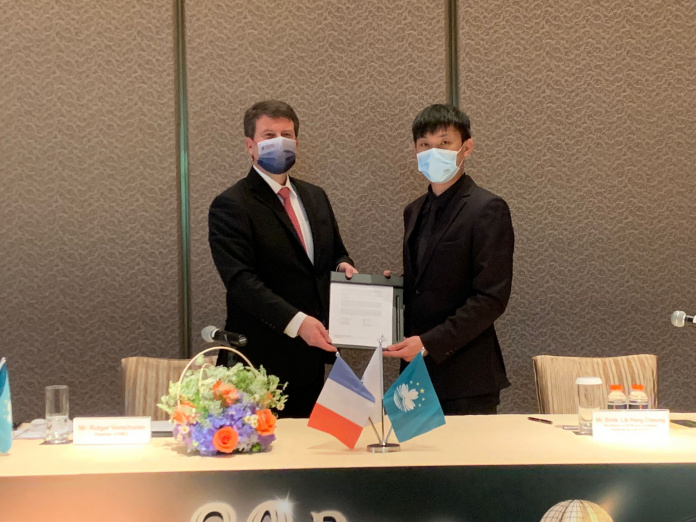 The France Macau Chamber of Commerce (FMCC) will organise its annual charity gala dinner next month in support of the Association of Rehabilitation of Drug Abusers of Macau (ARTM) to raise the awareness of alcoholism in the local community and improve the relevant treatment and counselling service.

The FMCC 2022 Charity Gala Dinner, adopting a theme of “Around the World in 80 Days”, will be held at the Grand Ballroom of MGM Macau on 25 March.

In a press conference held today (Tuesday) about the gala dinner, both parties inked an agreement for their collaboration.

With FMCC boasting a tradition of organising the annual gala to support various local charity organisations for more than a decade, Rutger Verschuren, Chairman of FMCC, remarked in the press conference the event this year would support the launch of “Alcohol Prevention and Counselling” programme by ARTM, which he described “is vital for the society”.

In a message read today in the press conference about the gala dinner, Augusto Nogueira, President and Executive Director of ARTM, expressed gratitude to FMCC for its support of the association’s “Alcohol Prevention and Counselling” programme, which will include a community awareness campaign targeted at both local youngsters and adults, the set-up of a 24-hour hotline for alcohol problems and domestic violence, and others.

There is “a lack of research” about the situation of alcoholism in the city, as well as “a lack of information and guidelines” for people to seek help like treatment and counselling if they have alcohol problems, Mr. Nogueira said, hoping their programme could fill the gap in these areas.

The theme of the gala dinner this year, “Around the World in 80 Days”, draws inspiration from the eponymous adventure novel by renowned French writer Jules Verne.

“This fantastic theme resonates with us all, I suppose, as we are eager to travel again,” Mr. Verschuren said today.

He expects “a full house” again for the gala dinner this year, which will be attended by community and business leaders from Macau and the Guangdong-Hong Kong-Macau Greater Bay Area (GBA).

The FMCC Charity Gala Dinner held last year attracted the attendance of over 300 guests and raised more than MOP75,000 (US$9,302) to support the “Visit the Elderly” programme of the Macao Fok Sin Association.

In the press conference today, Erick Cheung Lik Hang, a representative from ARTM, said some studies showed the alcohol consumption among young people in Macau was more severe than in nearby cities, adding the association has seen more people in Macau seek help in regards to alcoholism since the start of the Covid-19 pandemic more than two years ago.

He also introduced in detail today how the association — which has so far provided residential treatment for 54 people with alcohol problems — would use the financial support from the gala dinner to implement its “Alcohol Prevention and Counselling”.

The measures to be launched by ARTM include the development of alcoholics anonymous (AA), a fellowship of people gathering together to share their drinking problems and support each other; providing counselling and intervention service for people with alcoholism and their family members.

Others will include the launch of research about the alcoholism situation in Macau; the establishment of a Chinese and English website about the information of alcoholism; the production of pamphlets and other publicity materials, as well as promotion, about the treatment and counselling of alcoholism; and others.

June 27, 2022
The African Union Commission chief has voiced his shock at the "violent and degrading" treatment...
Load more