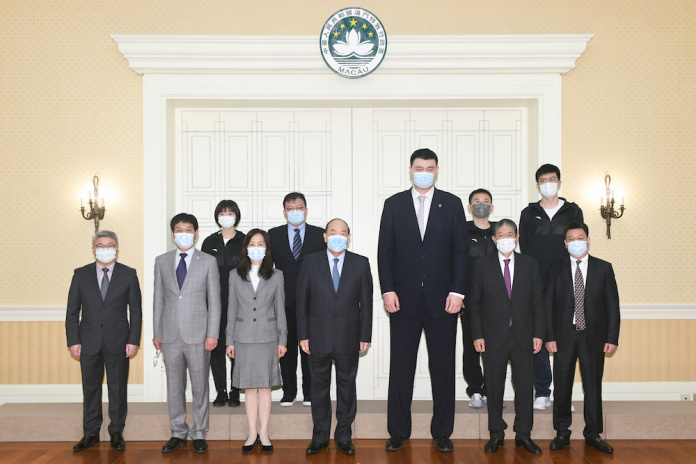 Retired Chinese basketball superstar Yao Ming has visited Macau under his role as President of the Chinese Basketball Association and held a meeting with Chief executive Ho Iat Seng to discuss the organisation of the 15th National Games, set to be jointly hosted by Guangdong, Hong Kong and Macau in 2025.

According to a government dispatch, the former NBA All-Star remembered that the Chinese Basketball Association faced many difficulties in holding various competitions during the pandemic and thanked the SAR government support in organizing the 2021 Men’s 3×3 Basketball Superleague at the Macau East Asian Games Dome.

During his visit, Yao toured sports complexes and athlete training facilities in the city considering that Macau possessed a ‘good sports infrastructure’ to hold the events included in the 15th National Games.

Secretary for Social Affairs and Culture, Elsie Ao Ieong U, stated in the meeting that major sporting events could help attract foreign teams to the MSAR, as well as tourists who come to watch these competitions and visit, contributing to promoting the development of sports tourism in Macau.

The secretary also hopes in the future there will be more opportunities for cooperation with the Chinese Basketball Association in co-organizing important sporting events.

Ho Iat Seng also underlined that he hoped in the future, more international sports competitions will be held in Macau.

As reported by Macau News Agency, a New East Asia Super League (EASL) format will include a new professional basketball team franchise named the Bay Area Chun Yu Phoenixes, comprising of athletes from Macau, Hong Kong, Mainland China, and Taiwan, and involving a possible possibly as high as US$13 million.

After a career with CBA’s Shanghai Sharks, Yao became the third Chinese player to join an NBA team, playing eight seasons for the Houston Rockets.

The Center Yao was selected to start for the Western Conference in the NBA All-Star Game eight times and was named to the All-NBA Team five times, earning an induction into the NBA Hall of Fame.

He is also a Member of the Chinese People’s Political Consultative Conference.

May 24, 2022
Tedros Adhanom Ghebreyesus, who is all but guaranteed to secure a second term as WHO...
Load more